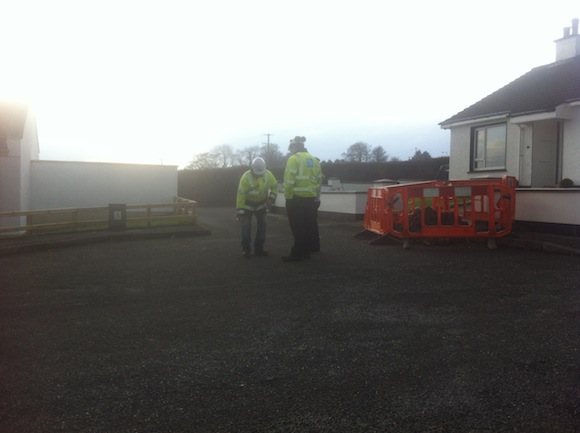 BREAKING NEWS: More than a dozen Gardai have been despatched today to patrol a Co Donegal village after Irish Water contractors were involved in a stand-off with residents.

Residents in Drumkeen were woken from their beds at 7.20am to the noise of workmen drilling and digging holes outside their homes.

Gardai – including two plain clothes detectives – have been on duty in the village since.

Angry residents in one estate have since insisted that the contractors re-fill holes dug outside their homes.

However the contractors are continuing to fit meters outside homes where residents are not at home today.

Residents say the contractors – who are paid hundreds of euro for each fitted meter – said they would return tomorrow morning to continue their work.

Cll Gary Doherty had been involved in some early morning negotiations with GMC Sierra, the contractor.

“We will be up at 7am tomorrow again to make sure they don’t fit meters,” said one angry resident.

“We have to send a message to the Government; we’ve had enough of austerity and we will not be paying any water charges.”

All the protests today have been peaceful. Two garda patrol cars have been stationed in the village all day.

A nearby resident also ordered Irish Water to leave his private lane when workmen arrived there shortly after 2pm.

There is a tense atmosphere in Drumkeen this afternoon; with residents planning more protests tomorrow.