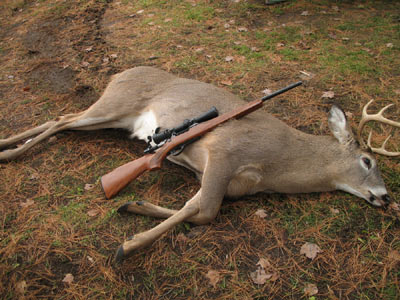 Two men caught illegally hunting deer using lamps and a high-powered rifle have been fined a total of €1,500.

Derek Hay and Robert Sheridan were stopped by Gardai driving a jeep at Cratlagh, Milford on November 10th, 2012.

Gardai had ben called to the scene after a man reported a lamp being shone out of a jeep and hearing the sound of gunshots.

When Gardai stopped the men, the found a legally-held rifle, a silencer, a rifle-scope and a lamp with wire coming from the bonnet of the jeep.

Animal hair and blood was also found in the vehicle.

When the land was inspected the following day, a dead deer and ammunition shells were found.

Solicitor for the men, Mr Seamus Gunne said the men had permission to shoot deer on lands very close to where they were stopped.

He added that the hunting of wild deer was quite common in certain parts of the country.

However, Judge Denis McLoughlin interjected and said he knew all about the hunting of deer but asked for the justification of shooting deer using a lamp.

Mr Gunne said he was not trying to justify the situation and that his clients now accepted it was an “opportunist act” which they accepted was unlawful.

The defence solicitor said Mr Hay, 52, of Portlean, Termon held a gun license since he was 18 years old and was small farmer who only had one previous conviction for drink driving a number of years ago.

“He has been pursuing wildlife for sport for the best part of 30 years and on this occasion he got it wrong,” said Mr Gunne.

Judge McLoughlin said it took two men to carry out the lamping of deer and that Mr Sheridan, aged 46, of Coolboy, Letterkenny had also played his part.

“As far as I’m concerned it was a two man job,” said the Judge.

He fined Hay €500 for using a silencer, €250 for hunting with a lamp and a further €250 for not having his jeep taxed. He took other charges against Hay into consideration.

Sheridan, a father of one, was fined €500 for hunting with a lamp.