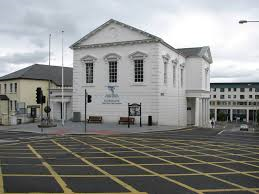 MAN REPEATEDLY TOLD GARDAÍ TO F**K OFF AFTER ALTERCATION

A man who repeatedly told Gardaí to ‘F**k off’ following an altercation involving his friends has been fined.

Conor Mallon, 20, with an address at Cross, Eglinton, Co. Derry appeared at Letterkenny District Court yesterday morning in relation to the incident which occurred on October 25th, 2015.

The court heard how the defendant became embroiled in the exchange with Gardaí – following an incident with the groups of friends he was with.

Gardaí were attempting to resolve a row that had broken out – when Mr Mallon starting to berate the Gardaí.

Mr Mallon, who was extremely intoxicated at the time repeatedly told Gardaí to ‘F**k off’ and said, ‘F**k you, F**k you’ when asked to leave the scene.

Mr Mallon continued the tirade and Gardaí were left with no option but to arrest him.

Solicitor for the defendant Patsy Gallagher told the court his client apologies profusely for his actions – and deeply regretted the incident.

Gallagher said, “He fully accepts that the other parties in the group he was with got involved in a situation – and that he should’ve stayed out of it.

“He apologies profusely for his actions and was highly intoxicated at the time and that affected his judgement.

“He’s 20 years of age, and is an apprentice foreman in the construction industry.

“He has no previous convictions here and has none in Northern Ireland either.

Judge James Faughnan ordered the defendant to make a donation of €350 to Pieta House, Letterkenny.