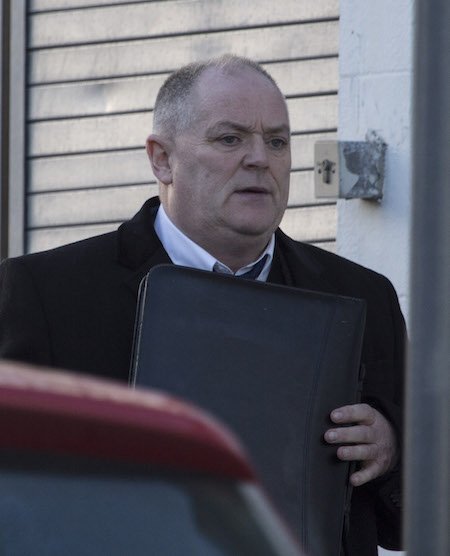 John Moran who was found not guilty of al charges. (North West Newspix)

A man charged who was charged with threatening to kill a Garda and unlawful possession of a gun during a disturbance outside an Inishowen pub has been cleared of all charges after a three-day trial.

John Moran, 57, of Serpentine Road, Belfast went on trial at Letterkenny Circuit Court charged with making threats to kill, possession of a .22 revolver, possession of ammunition and threatening and abusive behaviour during a fight outside the Orchard Bar, Gleneely in the early hours of April 5th, 2010.

The accused had denied all charges and a jury took less than an hour of deliberation to find him not guilty.

Mr. Moran, a car trader, had argued that he had acted out of necessity to protect his children who had been attacked by a group of three men. His son suffered a fractured cheekbone when he and a friend were kicked and punched and one of his daughters suffered broken fingers.

A number of local men had been previously convicted for their part in the incident.

The prosecution had argued that he had acted unlawfully and with a degree of premeditation in bringing the gun to the scene and that gardaí who attended the scene felt threatened.

Mr Moran had admitted producing the pistol from his pocket and shouting ‘I’ll shoot you’ after he had been called by his daughters who were hysterical and screaming.

He told gardaí that when he arrived at the scene he was struck on the head with an object by a man and was left with blood streaming down his face. It was then that he produced the pistol and pointed it at the man.

A retired garda told a court how he thought he was going to be ‘mortally injured’ when the gun was pointed at him.

Former Garda John McGrath and two colleagues arrived at the scene they found four to five groups of people fighting with each other.

As Garda McGrath and his colleagues tried to break up the fighting, a man came towards him and shouted “I’ll shoot you, I’ll shoot you.”
Ballistic examination revealed the gun was not capable of discharging a bullet.

However, the gun was considered a firearm as described in the Firearms Act, 1985 as amended in 2006.

Mr Moran had left a group including three of his children in the bar. His children told the court they were attacked as they left.

CCTV footage from outside the bar showed a melee taking place involving a group of people who spilled out of the bar. Family friend of the Morans, Bradley Beattie, was 16 at the time. He told gardaí he said he was assaulted by three people outside the bar. He was lying on the ground being kicked and stamped on. “I thought I was going to die as they kept kicking me when I was pushed to ground.” Bar Owner Dermot McLaughlin said one of the men involved in the assault had been barred previously after he had an altercation with the Morans but he had lifted the bar about four months earlier.

He said there was scuffling outside the bar and he did his best to separate the groups.
He let the Morans back into the bar and phoned a taxi for them and they then left in the taxi.

The accused’s son, Jonathon Moran, said his sister Andrea was knocked to the ground and as he tried to help her he was hit and forced to the ground. He was stamped on and kicked and received a fractured cheekbone which required surgery.

His father arrived after they got onto the taxi and got him and others from the group out of the taxi and into his jeep.

He then saw one of the men who had attacked them reach over and hit his father on the head.

“He screamed at me with blood coming down his face and he told us to get in Tourag jeep,” he said.

Stacey Donnelly, a daughter of the accused, said she got knocked down when she went to help Mr. Beattie and was trailed across the ground.

Her trousers were ripped, she suffered broken fingers and was left with over two dozen bruises.

Andrea Moran said she was hysterical when the phone call was made to her father. “I shouted to Dad please come and save us. They are beating us, they are killing us.”

In a statement to gardaí Mr. Moran said he got the phone call to go to the pub and Stacy said they “were getting murdered”.

He had been on his way to the pub and went back to his holiday home and got the starting pistol which he had got in 1995 after a burglary at his home. When he arrived at the pub he said he saw his son or Mr Beattie being kicked on the ground and he parked the middle of the road. He saw four or five men come running towards him and he was struck on the forehead by one of the men, which left him bleeding. He pulled the pistol out, pointed it at him and told him to ‘fuck off’.

He said he threw the gun away and said to a female garda that he had a licence for it.

Garnet Orange (SC) for the defence, instructed by solicitor Frank Dorrian, said that Mr Moran had acted in a way that he thought was “right, reasonable, proportionate and necessary at the time to protect his children and get them out of there”.

Prosecution Counsel Patricia McLaughlin (BL), instructed by State Solicitor Ciaran Liddy, told the jury Mr Moran had brought the gun and produced it in a threatening way. “In no circumstances could that be considered lawful,” she said

The jury returned the unanimous verdict to Judge John O’Hagan of not guilty on all counts.