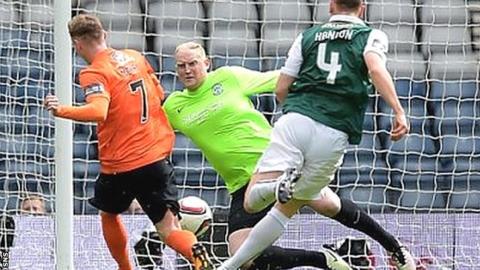 The game ended scoreless after extra-time, it went to penalties and Hibernian won the shootout 4-2 – with Logan’s saves the difference.

Incredibly, it was Logan’s first competitive game in fifteen months.

Logan on loan at Hibernian from Leicester City, saved the first two spots kicks and that sent the Edinburgh club through to the final.

The Ramelton native only signed for the Easter Road outfit earlier this month as an emergency loan.

Logan was sensational during the match and made three crucial saves.

Sky Sports commentator said, “The real hero of this game was Conrad Logan, he was sensational.

“He made three incredible stops during the match, and then his two penalty saves in the shootout.

McCann said: “Logan was just fantastic, he was faultless all game, he was so polished and didn’t make one bad decision.

“What a game he had, and it was written in the stars for him that he’d be the hero.”