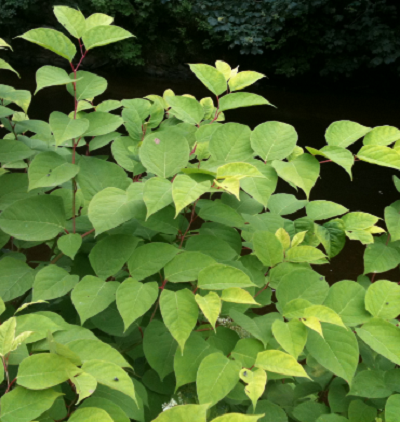 DD Gardening: Could this animal help curb this weed?

The invasive weed Fallopia Japonica, otherwise known as Japanese Knotweed, has made some serious headlines over the past few years, with Donegal County Council undertaking a 4 year treatment program to map, treat and control some of the areas affected by the bully of the plant world.

You may have seen some of the new Council signage which has been placed on areas of Knotweed beside public roads? And you may be interested to know you can report locations of Knotweed infestation on public lands to info@donegalcoco.ie.

Treatment of Japanese Knotweed is primarily by application of a systemic herbicide (weedkiller to you and me), most probably Glyphosate – applied by injection into the stem is the most efficient manner, but don’t be surprised to see a backpack sprayer being used in a more ‘blanking bombing’ approach – leaving banks of yellow grass behind.

Another recognised treatment is by burying the roots of Knotweed, at least to a depth of 5m, with a membrane placed across the top before being refilled with 5m of soil.

There is also much talk about the use of Knotweed in Herbalist circles, with much being made about its Resveratrol content, but the destruction this plant carries out, in my opinion, negates any potential benefits from this compound, plus I’d rather get my Resveratrol supplies from grapes and chocolate!

But, here’s where my research brain kicks in, what if you could use conservation grazing to control or eradicate Japanese Knotweed from a site? So instead of using chemicals or deep excavation you could use pigs to eradicate these plants? And in turn with the Knotweed being high in Resveratrol and other compounds how will this benefit the pigs in term of condition, growth and quality of meat?

Well this is exactly my piece of research we are carrying out in the walled garden of Bogay House Near Killea. Bogay Glebe dates from the mid 18th century, originally being built as a hunting lodge for the Abercorn Estate, and although the 2 acre walled garden was still productive into the 1980s in recent times however the garden has fallen into complete neglect and has been swamped by Japanese Knotweed.

My plans is to conduct a trial as to gauge the effectiveness of pigs as a form of control for Japanese Knotweed, with the topic being “To what extent does the introduction of pigs onto established Japanese Knotweed either control or exasperate the growth of this plant”.

It is widely known that this knotweed is edible, with human consumption of the red new growth commonplace and grazing animals happy to nibble at the new growth and early shoots, but I’ve wondered if the pigs would root out the problematic fleshy roots and consume these, and how much of the roots would be left behind or will they just break up the roots causing the weed to spread more.

Pigs have been and are being successfully used for the conservation grazing of bracken in Scotland.

Currently we’ve mapped the existing Knotweed locations within the walled garden and next Spring regrowth of Knotweed will be mapped upon removal of the pigs.

The pigs used in this trial are coming from John Hamilton of Hamiltons Farm in St Johnston who specialises in free range pig production, so the highest of animal welfare standards will be maintained and during the trial the pigs will be fed an organic diet to ensure that they are in top condition.

The use of pigs for cultivating land is a traditional technique for clearing and readying land for planting, it also has the benefit of bringing stones to the surface for removal and the pig manure adds fertility and organic matter to the soil.

Upon removal of the pigs and subsequent mapping of any Knotweed regrowth the walled garden is destined for reworking into a productive walled kitchen garden, supplying organic fruit and vegetables as it did for 200+ years.

Results of this trial will be known in the Spring, with results being published here and on my website.

More details of Bogay Walled Garden and Hamiltons Farm can be found on their relevant Facebook pages, where you can also follow this ongoing trial.