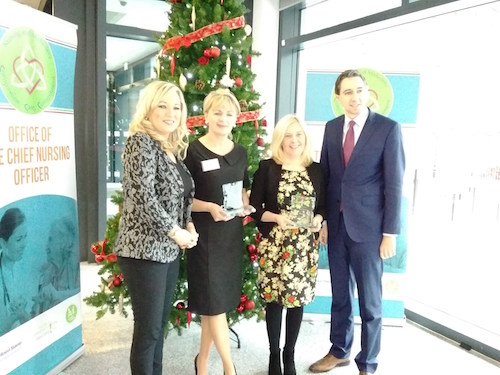 Members of the Oncology Nursing Team at Letterkenny University Hospital involved in the development of the recently opened North West Cancer Centre at Altnagelvin Hospital have been announced as joint winners of the Chief Nursing Officers’ Award for Excellence in Cross Border Nursing.

The award was made to the team along with Una Cardin, The Western Trust’s North West Cancer Centre Manager, in recognition of their contribution to this new cross border health service.

Both played pivotal roles in bringing the new service to the North West area.

The awards were presented at the annual All-Island Chief Nursing Officers’ Conference in Dublin Castle on Monday 5 Dec 2016, which was attended by both ministers for health: Minister Michelle O’Neill, MLA and Minister Simon Harris T.D. who addressed the 350 plus delegates.

The Excellence in Cross Border Nursing Award is sponsored by Co-operation and Working Together (CAWT), the cross border health and social partnership, and recognises innovation and excellence in patient care, either within the border region or on an all-Island basis.

Chief Nursing Officers, Dr Siobhan O’Halloran at the Dept of Health in the Republic of Ireland and Charlotte McArdle, at the Department of Health in Northern Ireland presented the two winners with the Award. Both award winners also receive a bursary from CAWT to utilise for professional development activities. The Award acknowledges the importance of the role of the nursing profession in ensuring this major cross border initiative, the North West Cancer Centre, provides top quality, patient-centred care to the population of the North West.

He said “This award reflects the commitment and excellence of the work undertaken by Clare McAleer and the Oncology Nursing Team at Letterkenny University Hospital in designing and commissioning a seamless service between Letterkenny University Hospital and the North West Cancer Centre. This new Centre, which has begun to treat its first Donegal patients, marks a historic achievement for both cancer care in the North West of Ireland and also for cross border health collaboration between our two systems.

“It is essential that if our patients are to experience the best quality service that their treatment journey is effortless between the Letterkenny University Hospital and the North West Cancer Centre, The work that Clare and the Oncology Nursing Team have undertaken over the last 2 years has ensured the integration of our two services in this joint venture for the benefit of our patients. I would like to congratulate Clare and the Team on achieving this award, and acknowledge the ongoing teamwork of our Nursing Team with their colleagues in Altnagelvin Hospital.”

Congratulating Una on her award, Elaine Way, Chief Executive of the Western Health and Social Care Trust (WHSCT) said: “This award is a fitting acknowledgement of Una’s unrelenting commitment to develop a first class cross border cancer centre that will improve outcomes for cancer patients. Her persistence, drive and enthusiasm over the past number of years from the beginning of the project right up until we began treating our first patients last week, is remarkable. This is a richly deserved award which not only recognises Una’s own work but also acknowledges the great team of cancer services staff working in the North West Cancer Centre.”

Commenting CAWT’s Deputy Chief Officer, Edel O’Doherty said: “Both winners are most deserving of this Excellence in Cross Border Nursing Award for the important work they have undertaken to ensure that people both sides of the border receive the best care possible at the new North West Cancer Centre. Many years of hard work and planning have gone into ensuring that patients who undergo cancer treatment will experience excellent standards of care in this state-of-the-art facility. On behalf of the CAWT Partnership I congratulate both Award winners.”