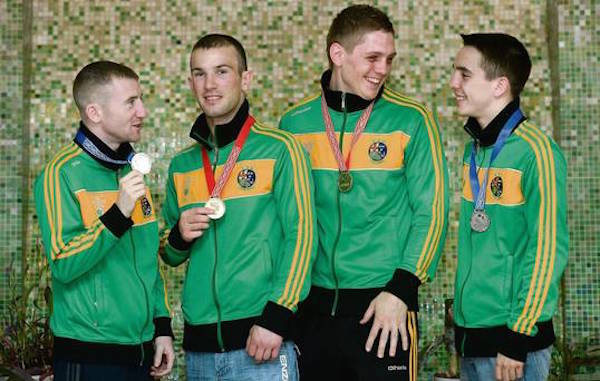 ‘Now is the time’: Quigley looks to regroup with Irish stars for ‘massive’ homecoming card

THEY had the boxing public spellbound at times as amateurs – and now Jason Quigley wants Ireland’s golden generation to bring big time boxing back to the Emerald isle.

Quigley has an unblemished 11-0 record in the paid ranks and the former European gold and World silver medalist is dreaming of putting on nights to remember back on home soil.

In recent months, since the Olympic Games in Rio, the Ballybofey man has been joined in the professional game by his former Irish amateur colleagues Michael Conlan, Paddy Barnes and Katie Taylor.

“We have the opportunity to give back to the Irish people,” Quigley said in an in-depth interview with Donegal Sport Hub.

“I want to give back to the people who have followed me, traveling up and down to that stadium on the good days and bad.”

“I be in touch with Katie often. She is one of the most nice people you could meet. She is such a humble, lovely, down to earth person. What she has done for Ireland and the sport of boxing is unbelievable. To share a card with Katie would be unbelievable – imagine if that happened!

“Me and Mick are teaming up and that is going to be exciting. We are definitely going to put on big cards in the future.”

Belfast bantamweight Conlan is to team up with Quigley at The Rock Gym in Carson, under trainer Manny Robles and Quigley sees big opportunities on the horizon for Ireland’s new batch of World title hopefuls.

De La Hoya and Quigley’s management team, Sheer Sports Management, made it known that he plans to bring the middleweight prospect back for a homecoming bout in times.

Quigley said: “It is one of my biggest goals: to bring massive fights back to Ireland. To bring big, exciting fights back. To get the Irish people excited about going to fights. All these big fights are in Vegas, New York, London.

“Now is the time to bring it to Ireland, us young fighters who have served our time at amateur level and are working our way up.”

‘Now is the time’: Quigley looks to regroup with Irish stars for ‘massive’ homecoming card was last modified: December 14th, 2016 by Chris McNulty

Man injured in housefire in Dungloe