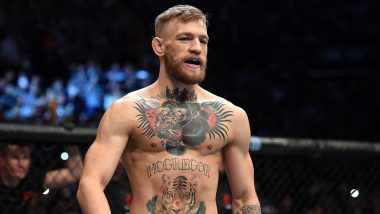 Which former Donegal GAA star was a groomsman at the McGregor wedding?

The UFC champ was the star attraction yesterday as Aoife tied the knot with long-time partner Mark Elliott.

But a well-known Donegal man also played a major part in yesterday’s wedding.

No better man than former St Eunans and Donegal GAA star Brendan Devenney to take part in the occasion as he was a groomsman.

Devenney happily posed for photos alongside the UFC millionaire and his family at the five star Powerscourt Hotel in Co Wicklow.

Devenney and groom Elliott have been close friends for many years.

McGregor told waiting fans: “I’d better get inside, this isn’t my day, this is my sister’s day.”

Several burly minders with in-ear radios also kept watch inside the lobby preventing people from taking pictures of the bride.

The large wedding party then moved inside to a private area of the exclusive property, set on the 19 hectare Powerscourt estate.

McGregor is currently taking a break from UFC pending the birth of his child with long-term partner Dee Devlin in May.

Which former Donegal GAA star was a groomsman at the McGregor wedding? was last modified: January 1st, 2017 by Stephen