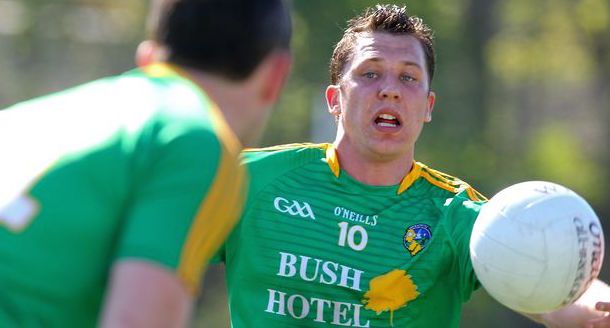 Ex-Leitrim ace in line for Donegal debut against Kerry

When Brennan made a full-county transfer from Leitrim to Donegal in December 2014, the move was criticised by then Leitrim manager Shane Ward.

Brennan, who was a key man for Leitrim, switched from Melvin Gaels to Bundoran and it was said at the time that the powerful half-back was set to join Rory Gallagher’s Donegal squad.

Despite being persistently linked to the Donegal set-up – indeed, it was even said that getting ‘a chance’ with Donegal was central to the initial move, though the timeframe suggests those noises had little substance – Brennan has not yet featured.

He did, however, make his first outing in a Donegal jerset in December when he played in the 1-18 to 0-9 challenge win over Sligo at Colaiste Ailigh in Letterkenny.

On Sunday, Brennan caught the eye as he played in the 1-11 to 0-13 win over Mayo at the Sligo Centre of Excellence.

Brennan – who helped Bundoran to the 2015 Intermediate title – now seems poised to line out against Kerry on Sunday and his experience could prove vital in light of several withdrawals from the panel.

Given that Eamon McGee, Colm McFadden, Rory Kavanagh, David Walsh, Christy Toye, Odhrán Mac Niallais, Leo McLoone and Anthony Thompson are no longer available and the likes of Karl Lacey and Neil Gallagher will not return until later in the year, Brennan could provide much-needed inter-county experience to a Donegal side that is expected to be a changed outfit.

Kieran Gillespie will miss out through injury after he aggravated a hamstring injury in Gaoth Dobhair’s Ulster Under-21 loss against Watty Grahams yesterday, but Stephen McBrearty has recovered from injury again.