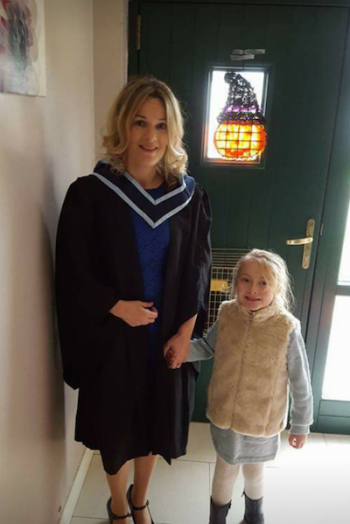 A Donegal mother whose daughter has a serious heart condition is distraught after being told her little girl’s surgery has been cancelled for a second time.

Karen Gainfort from Kilmacrennan was told by Our Lady’s Children’s Hospital, Crumlin that there was no bed available this week for her daughter Leona to get the vital heart procedure she needs to live.

This is the second time she has had the disappointing news that Leona would not be getting the scheduled procedure. It is their third time on the agonising waiting list.

Leona, aged nine, was born with seven different complaints in her heart, which included a hole in her heart. She had open heart surgery three times before the age of three and spent the first nine months of her life in the ICU in Crumlin.

“But she needs more open heart surgery and doctors want to put in stents and do an angioplasty to bide her more time for a year before another major surgery.”

Karen has received devastating news on two occasions that the stents and angioplasty procedure would have to be rescheduled because other emergency cases had come into Crumlin Hospital. There were no beds for Leona.

The first procedure was supposed to go ahead on December 19th, then again this week. Karen has been told Leona would be back on the waiting list and it could be up to two months again before she is called back to Dublin.

“It’s very worrying because Leona’s life is at risk. I’m scared something is going to happen to her, and if something did happen I would never be able to forgive myself,” Karen said.

Leona’s condition is called Tetralogy of Fallot, which means she has an abnormal blood flow to her heart and body.

“Leona could take a heart attack very easily. She can’t run around, she can’t do PE at school and she can’t play with friends in the playground in case someone would bump into her.

“She is a bubbly and happy wee girl who loves school, but she hasn’t got the energy to stick it out at school for the full week. She would suffer from pains in her heart.

“She is living a restricted life. It’s sad because she is quite an active child and I have to watch her all the time. I have a bag packed in the Jeep ready to go in case anything would happen her. I am terrified to answer the phone when there is a call from her school,” Karen said.

Leona is in third class in Ballyraine National School in Letterkenny, where she has a full-time SNA who must shadow her at all times.

“Her lack of energy is affecting her education too. This has gone past the ‘needs to be done’ stage. You’re living on the edge all the time. When she’s not well I just don’t know where to go,” Karen said.

Leona has an older brother and sister. It takes the family a lot of organising to prepare for the planned surgeries each time.

“We have to keep her out of school for a few days each time before the procedure so she doesn’t pick up any infections. I have to do my bit to keep her healthy. You have to book into Dublin the night before and make plans to travel and stay each time.”

“Leona has to prepare herself for going to hospital and tell her friends she won’t be at school for a while. She would be worried about it and asking questions about what is going to happen afterwards,” Karen said.

“It’s causing us a lot of drama when they are cancelled each time. The quicker it would be done and dusted the better,” she said.

Leona currently has a cow’s pulmonary valve that is in need of replacing. She has outgrown the valve but medics are waiting until she is a year older. Every open heart surgery is an increased risk to her, which is why she needs a procedure urgently in Crumlin.

“Her health is failing as time goes by and she is not growing at the moment. There is just a waiting game until this procedure is done. I have been to the GP with her on numerous occasions and she has been to Letterkenny University Hospital but there is nothing they can do for her because her case is too complex,” Karen said.

“The medical team in Crumlin have been with Leona since day one and they are absolutely brilliant for what they can do. I’m not blaming them because I know they are in a crisis. This is a problem so many other people are facing.

“This is basically down to a lack of a bed for Leona. Our GP is trying to speed up the process by sending letters to Dublin about her symptoms to show how much she needs this quickly.

“It’s my child at the end of the day and I would never be able to live with myself if I didn’t do all I could to help her. We just want a clear plan and for the plan to be carried out. We don’t want to be messed around any longer,” Karen said.