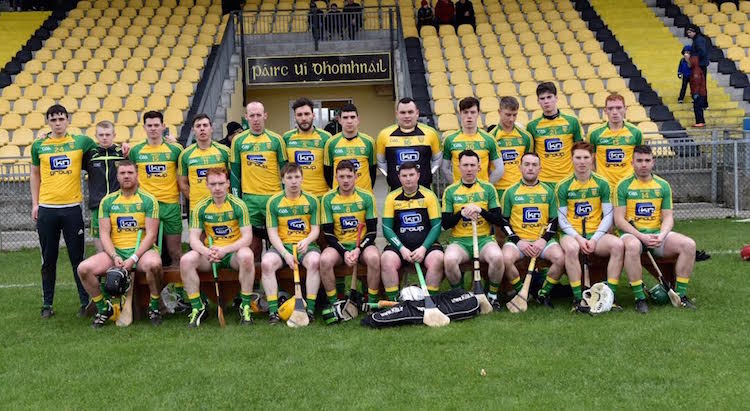 Donegal reeled off 13 points in a row on their way to a 12-point win over Louth in Division 3A at O’Donnell Park this afternoon.

Goals by Cathal Doherty and Kevin Campbell sent Ardal McDermott’s new-look side on their way, but they needed a brilliant purple patch in the second half to pull clear of the Wee County.

Louth did lead briefly when Seaghan Connolly goaled, but Donegal, pictured by Geraldine Diver, roared to a win as they hit 13-on-the-spin.

Donegal got their first goal after six minutes when Doherty, after taking a pass by Henderson, drove low past the advancing Louth goalkeeper Shane Nolan.

Doherty is a brother of Padraig Doherty, a Nicky Rackard All-Star in 2016, and was making his Donegal senior bow – and what a way to mark it with a goal off his first strike of the hurl.

Donegal also gave first starts to Armagh native and 2016 Nicky Rackard All-Star Declan Coulter and Tipperary native Davin Flynn, both of whom are now working and living in Donegal.

They contributed nine points between them and Coulter landed a magnificent point on 11 minutes, stroking over from wide on the right.

Henderson slotted over a long-range point with Diarmuid Murphy and Gerard Smyth keeping Louth in check.

Donegal struck gold again in the 24th minute as Flynn’s great run provided the assist for Campbell, who hammered home in style.

There was just one point between them at the break, however as Liam Dwan and Darren O’Hanrahan fired over and indeed Dwan might have been in for a goal, only he was denied by some good defending by Jack O’Loughlin.

Louth led when Connolly tucked home after fetching a high ball in the danger zone and it was 1-11 to 2-7 on 44 minutes.

Donegal saw Danny Cullen fire narrowly wide before that while Smyth wasn’t far away for Louth.

Enda McDermott could have goaled when he latched onto a Flynn pass, but was off-cue from close-range.

Murphy drew Louth level after Flynn had posted for Donegal, but when Henderson drilled over a free in the 54th minute it was the start of a strong surge by the Tir Chonaill men.