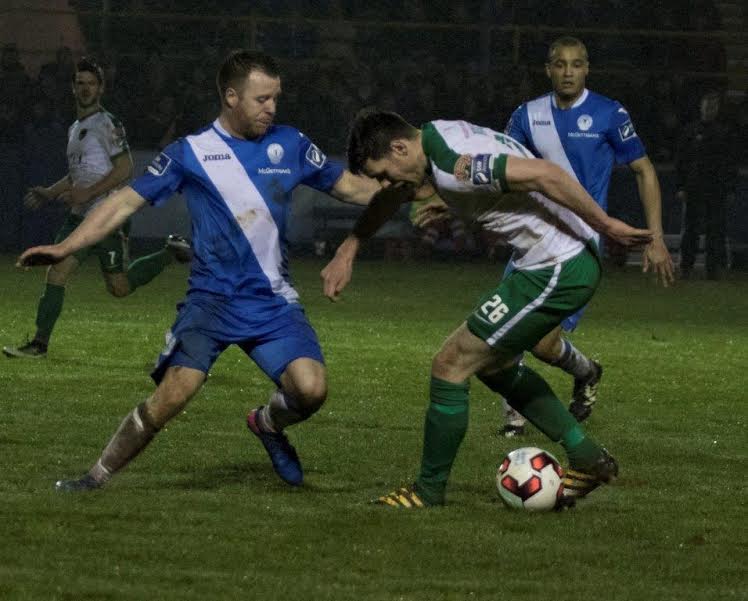 Sean Maguire netted the only goal of the game in the 45th minute to give John Caulfield’s Cork the win.

With a lack of pre-season friendlies on home soil, Friday’s game was the first chance for Harps fans to get a glimpse of the new players added by Ollie Horgan over the winter months.

John Caulfield reckoned that the Finn Park surface was ‘barely playable’ and he was perhaps being generous in his description. Former Harps boss Felix Healy, in a pre-season preview, was heavily critical of the pitch, but the Harps groundstaff, led by James Rogers, did well to get the game played.

It was difficult to gauge the new signings, but the initial showings filled the healthy 1,845 attendance with promise ahead of the new season.

Caolan McAleer was perhaps the pick of the bunch and drier nights and better ground will give a better indication of the Tyrone native. McAleer was busy, lively and threatening – and might well have equalised, but a second half shot was blocked by Mark McNulty.

Ciaran O’Connor has been given the number 10 shirt vacated by Kevin McHugh and gave a decent first outing in the jersey, while Harps fans will hope that Danny Morrissey’s injury is not as bad as first feared.

In Killian Cantwell, Harps seem to have found a sound, no-nonsense centre-back torn right out of Horgan’s play book.

The capture of Paddy McCourt last week caused a stir that has rarely been seen before around Finn Park. The former Celtic winger’s signing for Harps has raised eyebrows, but there is no doubt his addition to the squad brought a few more bodies through the turnstiles.

The Derryman’s very presence seemed to ignite something in the squad.

Even if his game time was limited to a 20-minute appearance off the bench, there was enough in that spell to please Ollie Horgan.

“He put the two balls in for our two best chances. If he can do that wee in week out of course he’ll contribute,” was how Ollie Horgan saw his display.

“He hasn’t played a whole lot, bits and pieces with Glenavon. He has a little bit to go, but he’ll get there fairly quickly.”

If he does, Harps might have a gem – and a flash of the McCourt of old – on their hands.

It was lost, somewhat, in the reams of content written about McCourt last week, but the return of Barry Molloy to Harps’ colours was a massive piece of business by Ollie Horgan.

The veteran midfielder’s initial retirement announcement had also been a little lost, given that what had looked to be his final senior game coincided with a farewell to Harps legend Kevin McHugh.

Molloy did some training with Harps in pre-season and Horgan’s persuasive powers bent him around to doing a u-turn on his decision to quit.

Molloy was a big player for Harps in the latter part of the 2016 campaign, even if his displays mightn’t have got the credit they’d earned.

Though he was back in the group late, Molloy was his usual picture of calm on Friday night, putting himself about to good effect and showing, again, that his experience will be vital in a huge season for the club.

Molloy is rarely wasteful and has a good knack of being in the right place at the right time.

Ollie Horgan will have been tearing his hear out at the manner of the Cork goal.

They had drawn a blank up to that against a stout Harps defence, but the Leesiders got a sniff and punished lethally right on the stroke of half-time.

Jimmy Keohane flicked on into the path of Sean Maguire.

Regarded as one of the League’s top performers, Maguire generally only needs an inch to take a mile – and he made no mistake with a clinical finish.

It was a tough blow on Harps, though it will serve as a valuable lesson again at this level. Cork had a couple of big chances in the second half, too, but Harps will feel as if they deserved a share of the spoils.

They could be doing with tightening those gaps, just a little, going forward, though.

There are those who say that Jonny Bonner shouldn’t have been allowed to leave Finn Park in the first instance but, after spells at Letterkenny Rovers and Wexford Youths, he’s back in the blue and white again.

The Buncrana man is a creative player that many mightn’t regard as befitting of a place in an Ollie Horgan-managed side.

But his displays last season with Wexford showed that he’s quite at home in the Premier Division and Friday night marked his second coming to Finn Park with a good performance.

Bonner was a standout performer in difficult conditions in the second half especially and will have a big role to play. In the absence of the departed Tony McNamee, Bonner might be just what Harps need.