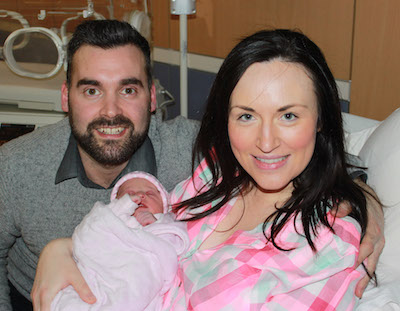 A heroic dad who helped deliver his new-born baby in the back of his car had to explain to his car valet that he wasn’t involved in illegal crime!

Paul Doherty came to the rescue when his wife Georgina went into labour early just minutes from their local hospital.

The office worker calmly pulled into the side of the Buncrana Road in Derry and helped deliver new-born baby daughter on Saturday afternoon last.

With the help of ambulance personnel on the phone, Paul even used his shoelace to tie the baby’s umbilical cord before the couple was taken to Altnagelvin Hospital in Derry.

But Paul has now revealed how he got some strange looks when he brought the family car in for a clean-out after the couple’s ordeal.

He revealed “We had been through a lot and I decided the car needed to be cleaned out after Georgina had to deliver the baby in the car.

“You can imagine the scene when I left the car in for valeting. I got some funny looks and I had to explain to the guy that I wasn’t up to anything illegal and it wasn’t actually a crime scene.”

Paul recalled how he had to multi-task as baby Saphia insisted she was coming into the world very quickly, despite being 13 days overdue.

He recalled how he had called the ambulance service who were talking him through delivering the couple’s fourth child.

“I was on the phone taking instructions and trying to help Georgina when all of a sudden the baby arrived. I think I dropped the phone in the panic.

“Thankfully everything was okay and the ambulance service, who were amazing on the day, arrived a couple of minutes later,” he said.

After being guided by the ambulance personnel to tie his new daughter’s umbilical cord with his shoelace, Paul was delighted to be allowed to cut Saphia’s cord when the medical professionals arrived.

But he does have one regret from his overwhelming experience.

“I didn’t get to save the shoelace I used to tie the cord. I would have loved to have kept it as a momento but it got lost along the way.

“It’s just a small thing but the main thing is that Saphia and Georgina are all fine and healthy,” he added.

Amazingly Georgina and baby Saphia, who weighed in at a very healthy 7lb 2oz, were back home in Burnfoot just the next day.

“We have been swamped with lots of lovely messages and well-wishes. I don’t think Saphia is ever going to be allowed the moment she came into this world in a hurry,” added Paul.