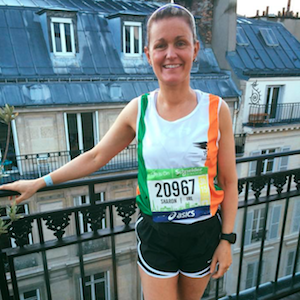 Sharon Black emerged from The Race on Saturday as the second woman and, in the process, became the first ever Donegal woman to complete The Race.

This gruelling event, one of the toughest in the world, involves covering 250KM throughout the county.

Several Letterkenny AC runners travelled to the seaside town of Bundoran, in Donegal’s southern tip, on Saturday and in both the 10K and the 10 mile race, there were many outstanding performances from club runners.

Showing that good runners, like fine wines get better with age, the first three runners in the 10K were all in the M40 category. Ciaran Doherty was 2nd in 33.46, followed by Ivan Toner in 34.08. The race winner was Sligo AC’s Richard Gorman, whose time was 33.06.

Noeleen Scanlan has just emerged from a highly successful cross country season and she showed that she has carried her superb Winter form smoothly into the Spring road season. She acheived a new PB of 39.05. This gave her 3rd place in a very competitive women’s race.

On Saturday afternoon, Annmarie McGlynn had an excellent run in Derry. She ran a time of 16.51 in the ‘Paula St Paddy’s 5K’, which gave her 1st place in the women’s race and a 9th place overall finish.

Earlier in the week, on Tuesday evening, LAC was well represented in the LYIT 5K. Pol Mac Giolla Bhride was the first Letterkenny AC finisher. His time of 18.36 gave him 3rd place in a race that was won by Gavin Crawford in 16.53. There were superb performances by 2 LAC women. Monica McGranaghan was the first woman in a most impressive time of 19.14. Next was Maria Ni Mhaolagain. Maria showed her versatility as the renowned 200m sprinter clocked an excellent time of 19.21. Sean McFadden came home in 19.23. John Hughes’ time of 19.42 gave him 1st place in the M50 category. Adrian Callaghan’s time was 20.11. Richard Raymond was the first M60 runner in 22.15 and Marian Kerr’s time was 23.03. Bambi Doherty clocked 25.04 and Pat McKenna 25.05. Linda Cronin’s time was 27.05. Loyal LAC servant Jimmy Gildea had a fine run.

The younger generation of Letterkenny AC runners showed, yet again on Saturday, that the future of the club is in safe hands. 75% of the team of 4 who achieved 5th place for St Eunan’s in the Senior Boys race at the Irish Life Health All Ireland Schools Cross Country Championship at Mallusk, Belfast are LAC runners. Donal Farren, Eoin Hughes and Rayan Maguella all performed admirably over the 6,400m course.

In Saturday’s Letterkenny parkrun, Sinead Peoples was 2nd overall, and first woman, in a time of 21.15. Regular parkrun competitor, Peter McGlynn, completed his 45th parkrun in a time of 26.10. Peter was 3rd in the M55-59 category.

The club would like to convey best wishes to Paul McGlinchey, who had been making great progress until he was sidelined with a long term injury. Paul has recently started running again and it is hoped that he will be back competing again soon.

Letterkenny AC’s annual St Patrick’s Day Family 5K will take place on Friday March 17th. The 5K starts at 11.15am at Market Square. The entry fee is €8 and Registration opens at 10.00am at Aura Leisure Centre. Juvenile races, which are free, commence at 1.15am at the Market Square.