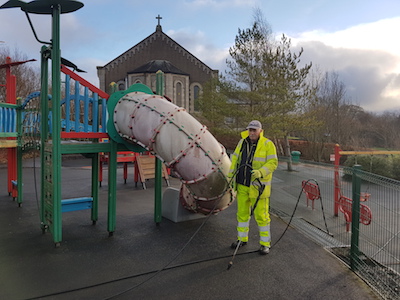 CCTV cameras for park after ‘disgusting’ incident at children’s playground

CCTV cameras are to be installed at the Bernard McGlinchey Town Park in Letterkenny.

It follows a horrific incident recently in which a gang left excrement on slides in the park’s playground.

Donegal County Council has today confirmed the imminent installation of cameras in the park to prevent any more such incidents.

He said “I brought in a motion to the February meeting for cameras to be installed after the latest act of anti-social behaviour at the park seen one of the children’s slides in the park being smeared with human excrement.

“Parents who regularly bring their children to the park were horrified to find the slides had been smeared with human excrement and raised their concerns with me which led to the motion.”

January’s attack on the popular Park was just the latest in a long list of anti-social acts at the Park.

Cllr McGonagle added “I have to commend the council for their swift response to my motion for cameras and extra lights to be installed in the Park and look forward to them being in operation by next week.