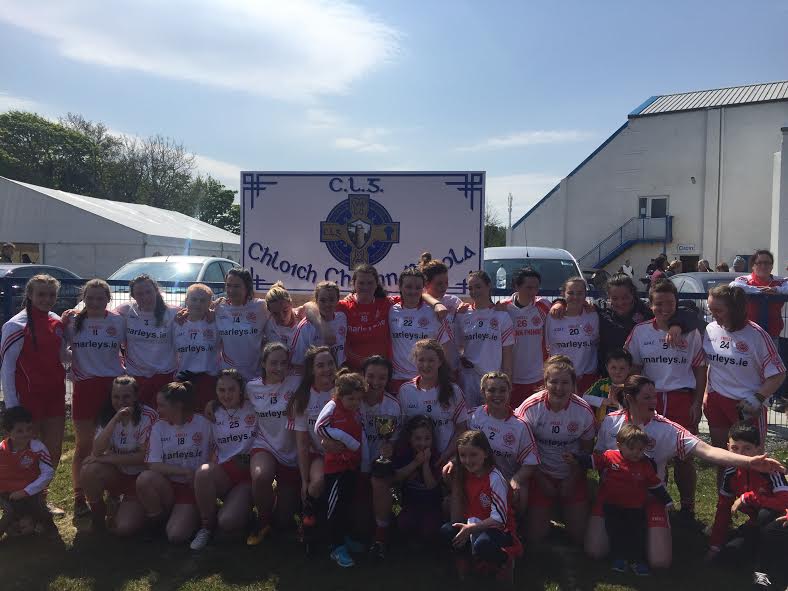 Glenfin turned an eight-point deficit into a six-point win to retain the Donegal senior ladies title at the county finals of Comórtas Peile na Gaeltachta in Falcarragh.

Sinead McGinty’s goal in the second half of extra time fired Glenfin to a title that seemed beyond their grasp at one stage.

Francie Martin’s side took a dramatic win on a day when both teams were missing their stellar names.

When Danielle McGinley soared over, seven minutes into extra time, Glenfin led for the first time in an absorbing contest and Coleen McGrath put them 2-9 to 1-10 ahead at half time in extra time.

Glenfin squandered a host of frees throughout, but McGinty came up from full-back to tap over and put the Pairc Tabhoige side ahead by three and when McGinty, after initially being denied by Annie McLaughlin, slotted home, it was Glenfin’s day.

Termon, led by player-manager Maureen O’Donnell, were eight up in the early stages of the second half of normal time and Glenfin looked dead and buried at that point – but Termon wouldn’t score for another half-an-hour.

A late Gemma Glackin goal helped pull Glenfin back and, in a dramatic finale, Anna Marie McGlynn landed an equalising score to take it to extra time.

O’Donnell, who has taken the reigns at the Burn Road for 2017, scored 1-4 in the first half, including a goal from a stoppage time penalty, as Termon took command in the early phases.

Termon – who left Falcarragh feeling hard done by with the amount of frees they’d conceded – led 1-8 to 1-2 at the break and with O’Donnell and Mya Alcorn on the mark they stretched the lead in the opening minutes of part two.

Termon lost Shannon McLaughlin to the sin bin in the 42nd minute for her part in an incident involving Katie Long.

And, just when it seemed as if the Glenfin goose was cooked, the An Gaeltacht Lár side found a way as Glackin, after taking a pass from Katie Long, drilled home to bring them to within four points

A pair of frees by Coleen McGrath – who netted the Glenfin goal in the first half – and another by Glackin set up a grandstand finale.

The spectators watched nervously as the clock ticked to its conclusion, and Termon came under fire in an inevitable onslaught when, finally, McGlynn hooked over and Glenfin, but for some profligacy from frees, could have won it before they did, eventually, seal the win.

There was frustration among supporters of the two teams beforehand and it perhaps wasn’t unreasonable to wonder if, given the status of Sunday’s League final, an alternative date couldn’t have been found for this game.

Despite the obvious drain of talent from the final – especially given that two of the country’s leading players in McLaughlin and McMonagle had watching briefs – the game was nevertheless a well-contested affair.

Termon, led by the experience of player-manager O’Donnell and Sharon McLaughlin, had a six-point lead at half-time.

McLaughlin and Lucy O’Flynn – who is also on the fringes of Micheál Naughton’s Donegal senior panel – put Termon in front and, after a brace of frees by Glackin, Termon hit a purple patch.

The Burn Road women hit the next six points with O’Donnell (4), McLaughlin and a classy effort by Mya Alcorn on the mark, but McGrath blasted to the net at the other end after taking a pass from Anna Ward.

In added time at the end of the half, O’Donnell smashed home a penalty after Sinead Doherty was deemed to have fouled O’Flynn, but it wasn’t enough for them to hold onto their lot as Glenfin completed the turnaround.