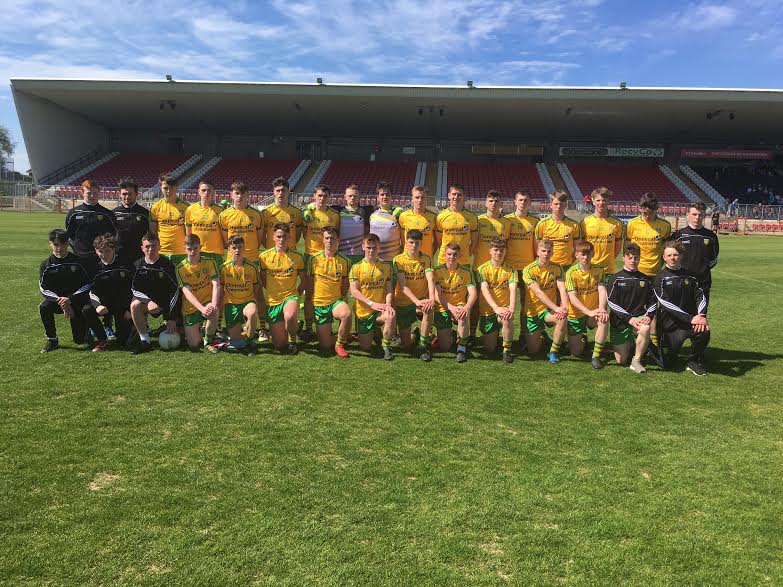 Donegal go down fighting against Tyrone in Ulster U17 Competition

written by Chris McNulty May 6, 2017
Facebook0Tweet0LinkedIn0Print0

An under-strength Donegal Under-17s went down to Tyrone in the Ulster Under-17 Competition at Healy Park this afternoon.

By Charlie Collins at Healy Park

Tyrone, inspired by Darragh Canavan – son of Tyrone legend Peter – took the win with Daniel Miller netting a brace of goals on a day when Donegal were missing their minor contingent and they make their way out of the competition.

All of Tyrone’s scores came from play and Donegal will rue the absence of some stellar figures.

Tyrone took the lead in the fifth minute of the second half when, after Donegal lost possession, Canavan sent Daniel Miller on his way and he fired past Eoin O’Boyle.

Donegal were level heading into the last 18 minutes as Glenswilly forward Shane McDevutt – Donegal’s top scorer on the day – finished to the net from a narrow angle after a good move involving Peter McEniff, Danny Gallagher, James Kelly and Odhrán Duggan.

Donegal were within touching distance, but Miller rattled in a second goal after a four-man move in stoppage time to put a gloss on the scoreline.

Donegal had started well with Shane McDevitt and Fionn Gallagher steering over and the Tir Chonaill lads were 0-5 to 0-3 ahead at the break.

Tyrone, with Canavan and Thomas Hoy on the mark, drew level, but McDevitt restored the advantage for Donegal with a brilliant free from out on the sideline.

Another wonderful McDevitt free, this time from a more central position, but still some 40 metres out, added to it.

Hoy stemmed the flow but Glenswilly man McDevitt sent Donegal two in front at the changeover, but with Canavan driving them on Tyrne turned the tables to take the win and advance.