Medical Matters: Sinusitis and how to deal with it

Sinuses are the little spaces within our cheekbones and forehead which are usually filled with air. This makes the bones of the skull lighter, and thus easier for our neck muscles to carry. They produce mucous which normally drains into our nose through small openings. Sometimes they become inflamed and this is called sinusitis.

Sinusitis can be acute ie lasts for a week or so but may last up to 3 weeks. Mild sinusitis with a cold is common but acute severe sinusitis is uncommon. Unfortunately some people are prone to recurrent bouts of acute sinusitis. Chronic sinusitis lasts for over 12 weeks and thankfully this is uncommon.

Temperatures , pain and tenderness over the infected sinus (cheekbones most common), blocked nose, loss of smell or indeed a runny nose. If the channels get blocked , this worsens the pain.
Other symptoms include :
Headache
Halitosis (bad breath)
Cough
Lethargy
Toothache
Ear discomfort

You should see the doctor if you develop severe pain or swelling at the front of your head, swelling around your eye, bloody discharge from the nose or a swollen face.

Smoking, previous injury, asthma, Cystic fibrosis, hayfever, pregnancy and reduced immunity (eg on chemotherapy)
Flus and colds are caused by viruses which often spread into the sinuses causing infection . In a small number of cases bacteria are also involved which makes symptoms worse and slows improvement.

Tooth infections can also spread into the sinuses causing problems
Sinusitis is usually diagnosed by your doctor after talking with you examining you, checking for temperatures, tenderness over the sinus areas and inflamation of the lining of your nose. Occasionally further tests may be required.

Antibiotics are not usually needed for most people as most cases of acute sinusitis are caused by a virus – similar to colds and flus – and antibiotics don’t work for viruses. The body’s own immune system can clear these viruses (and remember them for the next time!) and symptoms settle within a couple of weeks. Antibiotics can also cause side effects such as nausea, vomiting, diarrhoea and skin rashes and fungal infections.
However your doctor may prescribe antibiotics for severe or worsening symptoms, or if you have other conditions such as a heart condition.

Painkillers, fluids, saline nasal drops and nasal decongestant sprays to help unblock the nose. We should not use these type of decongestant nasal sprays for longer than a week however as they may actually worsen things!
Complications :

Other complications are rare (about 1 in 10,000) but serious. For example infection spread from the sinuses to around the eye, the brain, bone or blood. . Children are more at risk of this than adults. Any swelling or redness of an eyelid or cheek in a child with sinusitis should be seen by a doctor.
Dr Ciaran Roarty MICGP is in full-time clinical practice at Scally McDaid Medical Practice, Scally Place Letterkenny, Tel 0749164111

The column is intended as advice only. Should any of these issues affect you, or indeed if you have any queries relating to your health, you should contact your General Practitioner. 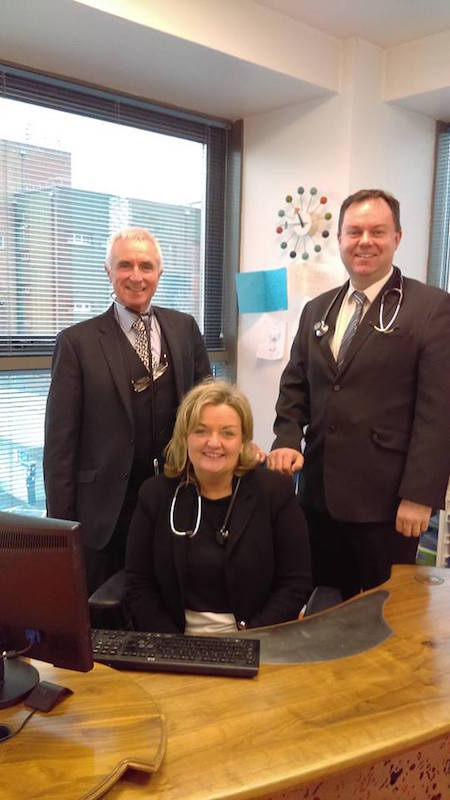 Medical Matters: Sinusitis and how to deal with it was last modified: May 9th, 2017 by Scally McDaid Roarty
FacebookTweetLinkedInPrint
Tags:
Dr Ciaran RoartyMedical MatterScally/McDaid Medical PractiseSinusitus