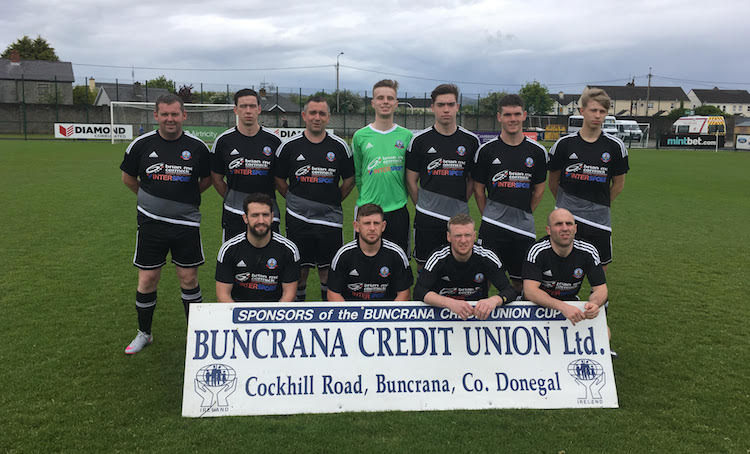 by Charlie Collins at Maginn Park

Stephen Parkhouse’s side had taken the lead through a Stephen McHugh penalty in the first half of extra time, but penalties were needed when Matty Henry volleyed home an equaliser for Greencastle.

The Chapel Lane men had James Henry sent off for a second yellow card offence in the 107th minute and it was Buncrana who prevailed on spot kicks when, in sudden death, Gerard Boyle netted for Buncrana, but Greencastle’s Gavin Harkin hit the post.

Buncrana should have scored inside the opening minute when Stephen McHugh put Liam McCarron through on goal, but he shot wide from 16 yards.

Greencastle had the better of it after that but neither side created anything of note until the 38th when Matty Henry got a second chance to cross from a corner and found Christy Hegarty, his first shot was well saved by keeper Eoghan O’Doherty and he blasted the rebound over.

Two minutes later, Hegarty had another chance when Shaun Doherty’s excellent cross found him at the far post, but he headed just wide.

In the final minute of the first, both teams went close.

McHugh sent Adam Duffy away the right and when his cross took a deflection keeper JP O’Doherty was beaten but the ball went wide.

Then after some excellent build up play by James and Matty Henry, Jamie Mc Cormick shot just over.

Greencastle had the early second-half chances. In the 47th minute  Hegarty headed Mc Cormick’s cross over from 12 yards and five minutes later Shaun Doherty’s 30 yard drive was tipped over by O’Doherty.

Buncrana were the better team in the later stages and Ryan Curren had a chance when James Henry’s pass fell short but Curran snatched at it and shot wide.

Buncrana took the lead when, after Kieran McDaid was fouled by Michael Barr, McHugh blasted home a penalty, but Henry riffled in the leveller after a Shaun Doherty free was nodded back across the six-yard box by Michael Barr.