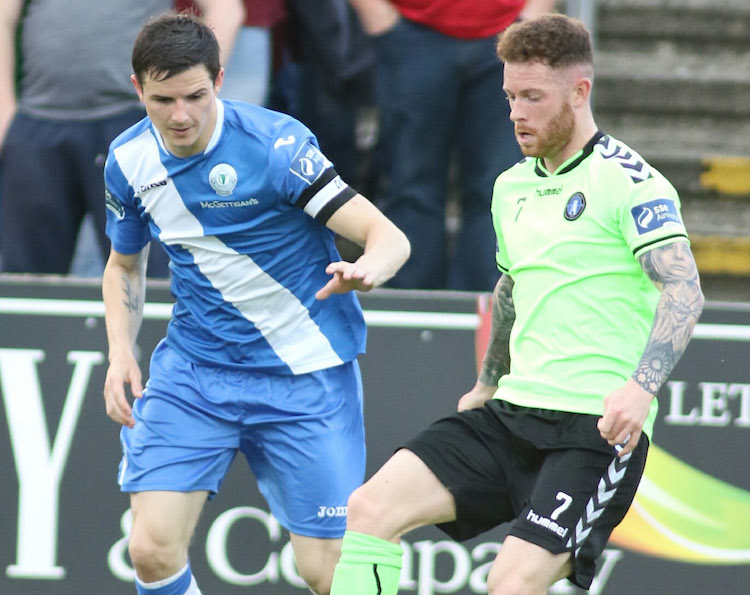 A nervy ending, but Finn Harps up to eighth with another home win

written by Chris McNulty May 26, 2017
Facebook0Tweet0LinkedIn0Print0

Finn Harps climbed out of the relegation zone thanks to another fine home win as Ollie Horgan’s men put Limerick to the sword tonight.

Again, the work was done in the first half, when Ciaran O’Connor, Danny Morrissey and Caolan McAleer bagged the goals in front of a much-improved Finn Park attendance.

Harps ended a run of five consecutive League defeats on Monday with a 3-1 win over St Patrick’s Athletic, a game watched by just 380 fans, prompting the club chairman, Sean Quinn, to issue a plea this morning.

A decent crowd here – including NABF middleweight champion Jason Quigley, who was a special guest of Harps and who was paraded on the pitch at half-time – saw Harps take a vital home win as Morrissey and McAleer netted after Lee-J Lynch cancelled out O’Connor’s opener.

It was a nervy finale, however, as Limerick sub Paul O’Conor finished from the edge of the box after Ciaran Gallagher punched away a Tommy Robson corner but Harps clung on despite having Morrissey red carded in added time.

The home support, having given Quigley a warm welcome at the interval, were on their feet again in the 74th minute as Michael Funston came on for his final Finn Park outing.

The Bonagee man confirmed during the week that he will leave the club next week after Harps face Sligo Rovers and this was the 334th appearance for the club for a fans’ favourite who made his debut in 2004.

Harps had been buoyed by Monday’s win and they were in front here after just six minutes.

O’Connor, back after serving a suspension on Monday night, tucked home after racing onto the ball on the edge of the six-yard box. Morrissey’s attempted overhead kick, from a Paddy McCourt corner, dropped invitingly and O’Connor finished.

That came after Limerick goalkeeper Freddy Hall superbly turned over from a brilliant Ciaran Coll header from 20 yards that seemed destined for the top corner.

The lead, though, lasted less than two minutes and it was another moment for the portfolio of gifts Harps have given opponents this season.

There seemed little danger when Lee-J Lynch lined up a free kick way out on the left-hand side close to the stand. Lynch’s kick, though, flew past everyone, including the static ‘keeper Ciaran Gallagher, to the back of the net.

O’Connor, McCourt and Kilian Cantwell returned to the starting XI as Horgan showed three changes from Monday’s win, with Jonny Bonner, Damien McNulty and Michael Funston – who announced during the week that he will leave the club after next week’s game against Sligo – dropping to the bench.

Harps were back in front on 22 minutes. Coll’s arrowed angled delivery found McAleer and his cushioned cross was turned in by Morrissey.

And it got even better for Harps when, five minutes before the break, McAleer had time to get onto his left foot and sweetly struck in off the crossbar.

Limerick ought to have pulled a goal back three minutes into the second half, but Rodrigo Tosi somehow fired wide after connecting to a cross by Killybegs native Shaun Kelly.

Harps themselves might have added to their tally, but Cantwell’s head, when an improvised McCourt free sent O’Connor in on the left, was too close to Hall.

When O’Conor netted for Limerick, the nerves whistled around the Finnside venue and Morrissey was sent off in the second of four added minutes – but Harps held on though there was time for Dean Clarke to head just wide in red time.

Devine leads after day one of the...

Callum Devine sets down a marker after...