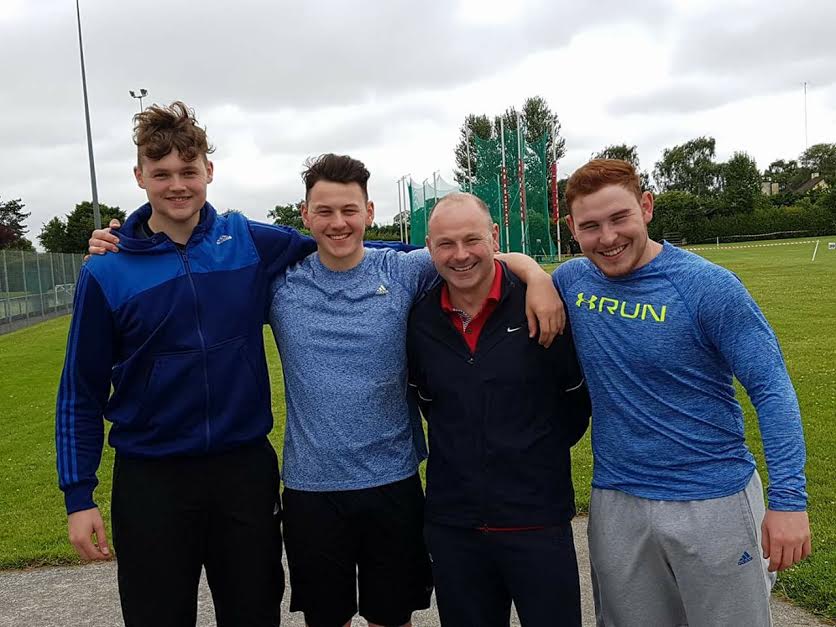 Donegal athletes had superb success at the National Junior and Under-23 Championships in Tullamore yesterday, returning 15 medals, seven of them gold.

It was a day of joy for the Donegal athletes and the junior athletes will be vying for inclusion now in the Irish team for the European Junior Championships in Grosseto, Italy.

Hot on the heels of his selection for the Irish Under-23 team during the week, John Kelly won the Under-23 shot, reaching out to 16.69 metres.

Convoy man and Finn Valley AC colleague Gavin McLaughlin, who is a training partner of Kelly’s, was the silver medallist with a 12.65m effort.

James Kelly was the gold medal winner in the junior men’s shot. Still with two more years of eligibility at this grade, James’ best was 15.05m to claim the win.

Lifford-Strabane AC’s Brendan O’Donnell shook off the effects of a broken wrist, sustained just a few weeks ago, to win the junior’s men’s hammer throw. O’Donnell launched out to 59.62m to take home the gold, with Coolcroo’s Sean Mockler his nearest challenger (51.87m).

There was delight for Lifford-Strabane’s Gareth Crawford, who took gold in the junior men’s javelin with a 56.22m throw while Dylan Kearns (50.66m) of Finn Valley won bronze in the same event.

Finn Valley AC woman Arlene Crossan has turned her season around in some style in the last week.

Last weekend in France, Crossan banged in a European qualification mark and yesterday she won the Junior 400m hurdles. Crossan has just completed her Leaving Certificate at Loreto Secondary School in Letterkenny and is set to head for the University of New Mexico in the autumn.

Crossan came home in a fine 1:01:08 to take the win from Monaghan’s Niamh Malone and will now hope to get a chance to get into p.b territory in Italy.

Tir Chonaill AC’s Kate McGowan scorched her way to a gold medal in the women’s under-23 400m hurldes. McGowan won in 1 minutes and 4.22 seconds from Aoife Conroy of Sli Cualann AC.

Finn Valley’s Jessica Roberts was the gold medal winner in the women’s under-23 1,500m event and there was a bronze for Janine Boyle in the junior 100m, which was won by Ciara Neville.

Jade Leeper of Finn Valley claimed silver in the Under-23 discus with a 33.48m attempt and Leeper also won bronze in the Under-23 shot, where she recorded a best of 9.94m.