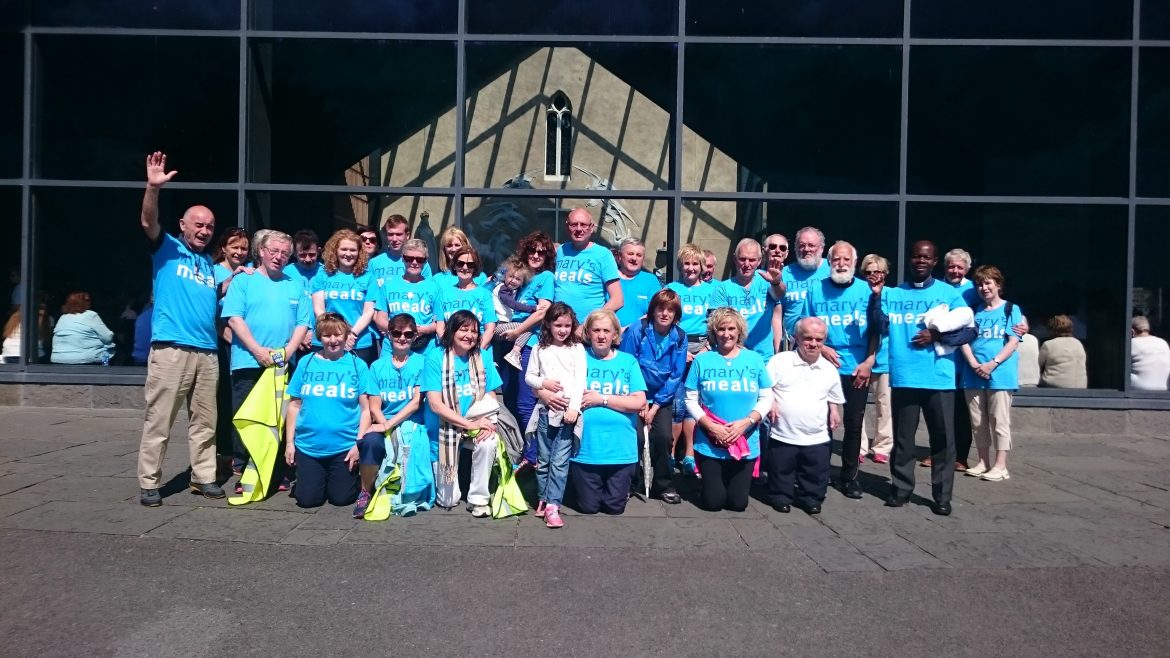 Mary’s Meals are going on a walk to Knock

Generous individuals from Donegal and all over Ireland are getting ready to set off on their annual nine-day trek to raise money for school feeding charity Mary’s Meals.

The challenge organised by Donegal Mary’s Meals Support Group sees participants walking to the Knock Shrine in Co. Mayo under the banner “Step By Step To Feed The Next Child”, raising awareness of the charity’s work and collecting vital donations for Mary’s Meals’ school feeding programmes along the way.

Groups of walkers set out from Dublin, Clare and Malin (Co. Donegal) on Monday, August 7 and are expected to arrive in Knock on Tuesday August 15.

Mary’s Meals provides a daily nutritious meal to more than 1.2 million children in their place of education, in 14 different countries around the world.

By serving daily meals in a place of education, Mary’s Meals addresses the effects of chronic hunger experienced by many of the world’s poorest children and encourages them to come to school and gain skills that can help them escape poverty in the future.

It costs just €15.60 to feed a child for a whole school year with Mary’s Meals. The charity is committed to keeping its costs low and spends at least 93 cent of every €1 donated directly on charitable work.

The Ireland-wide walking event is now in its fifth year and is organised by the Donegal Mary’s Meals Support Group. The annual challenge is an important fundraiser for the charity, raising €69,000 in its first year alone – enough to feed 4,758 children for a whole school year through Mary’s Meals.

Eimear Felle, Fundraising Co-ordinator for Mary’s Meals Ireland, said: “We are so grateful to everyone taking part in “Step By Step To Feed The Next Child” for their incredible efforts to help Mary’s Meals reach more and more children with a daily meal in school.

“Today, our work is more vital than ever. Across East Africa, drought and conflict have created a humanitarian crisis spanning several countries, including two where we serve Mary’s Meals – South Sudan and Kenya.

“During this time of crisis, the daily meal provided by Mary’s Meals is not only a powerful incentive to come to school, it’s a vital lifeline for vulnerable children in desperate need of nourishment.

“It costs just €15.60 to feed a child for a whole school year through Mary’s Meals so every donation raised by this event will make a huge difference to the lives of families suffering extreme poverty.”

To find out more about Mary’s Meals, or to donate, visit www.marysmeals.ie