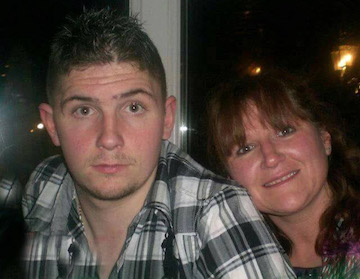 A heartbroken mum says her son could still be alive if a cross-border driving ban scheme had come in earlier.

Julie Paton’s eldest son Shane was just 18 when he was killed by banned driver Eamon Lynch.

Lynch had almost 500 previous convictions when he ploughed into Shane close to his home in the Co Donegal village of Drumkeen in 2012.

Lynch, from Derry, had been drinking, and was driving at high speed when his car struck Shane, who had just completed his Leaving Certificate.

So serious were his offences in Northern Ireland that he was banned from driving there until 2023.

Julie said her loving son could still be alive if the man who mowed him down was banned from being on the roads of Donegal.

“We will never know but if he was banned on both sides of the border then he might not have been behind the wheel that night.

“It makes so much sense that people banned in Northern Ireland cannot now just simply slip across the border and drive here.

“If these new laws do one thing then hopefully it will be to send out a message on both sides of the border that it is unacceptable to break the law.

“Shane was our first child and he was my pride and joy. OUr lives were destroyed when he was taken from us. Our family will never be the same again,” she said.

The new legislation means people banned on the other side of the border from where they live will have the prohibition extended to their home jurisdiction.

The law change gives effect to a road safety agreement signed between the UK and Irish governments in 2015.

The new laws covers drivers banned for a range of driving offences including hit and runs, reckless driving, dangerous driving, and also driving while under the influence of drink or drugs.

Lynch was jailed for 18 months earlier this year for killing the teenager while drunk and racing at speeds of up to 100mph (160km/h).

He had no driving licence or insurance when he crashed into Shane Patton’s car in County Donegal, and was previously described as having the biggest criminal record in British and Irish judicial history.

Shane was training to become a mechanic and had dabbled with cars all his life when his life was brutally ended by Lynch.

“All Shane lived for was cars. He knew so much about them and would have made a fine mechanic.

“He was due to start a course after he sat his Leaving Cert. He already knew so much about them.

“He used to tell his teachers that there was this or that wrong with their car because he knew so much already.

“He was a lovely young fella and he had his whole life ahead of him but it was just taken from him,” added Julie.