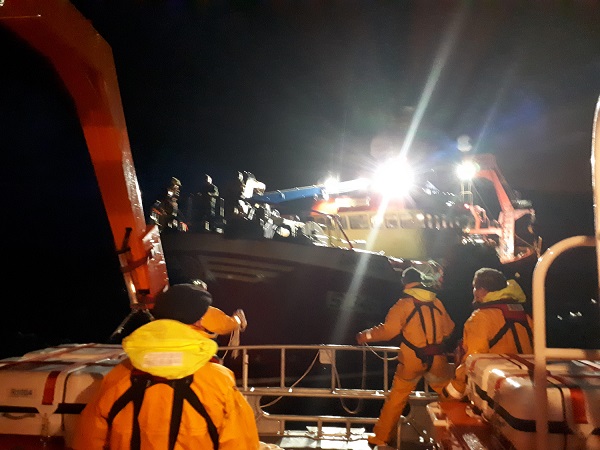 The Arranmore RNLI Lifeboat crew have finally arrived home after a rescue which took fourteen and a half hours to complete.

At 3:30am the Lifeboat was launched to assist an enormous 245-tonne fishing boat which got into difficulty with five people on board.

The 24-metre boat had left Killybegs in the early hours of this morning, but the ship got into difficulty as their engine failed 10 miles north-west of Glen Head.

They reached the ship at 5 am, and battled extremely challenging weather conditions in the darkness, with a two-meter swell and west/south-west winds with a force of 5-7.

When they reached the fishing vessel, the lifeboat crew managed to get a tow rope on board – but the tow rope broke several times due to the weight of the boat and the high swell.

Finally, having secured the rope, the lifeboat towed the boat to safety at Killybegs Harbour.

The tow took a gruelling nine hours to complete, with the lifeboat crew finally arriving home at 6 pm after refuelling at Burtonport.

Lifeboat Coxswain, Jimmy Early, paid tribute to the crew of the fishing vessel.

“They were a very experienced fishing crew and knew exactly what was required to bring them safely ashore, now it’s bedtime, hopefully.”