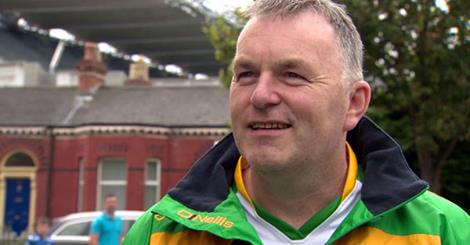 Three in the mix as Cathal Corey nominated for Donegal job

Cathal Corey has become the third entrant in the race for the Donegal senior football team manager’s position.

Corey was this afternoon nominated by the Naomh Conaill club, ahead of the 6 o’clock deadline.

The Kildress, County Tyrone native joins the front-runner, Declan Bonner and Gary McDaid – who last night confirmed his intention to leave his name in the ring – in the running to succeed Rory Gallagher.

That season, as joint managers, they took Naomh Conaill to the Donegal SFC final, but lost out to St Eunan’s.

The following year, when McGuinness left to take over the Donegal Under-21s, Corey stayed on as boss and guided the Glenties club to the Dr Maguire. Naomh Conaill went all the way to the Ulster club final, but were beaten by Crossmaglen.

Since then, he has worked with Ulster University Jordanstown, Slaughtneil and Banagher.

Bonner has been nominated by several clubs in the county and on Thursday afternoon confirmed he is seeking a post he previously held from 1997-2000.

McDaid returned from a holiday late this week and last night signalled that he will be in the running having been nominated by his club, Glenswilly.