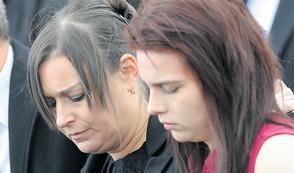 The solicitor representing the family of tragic teenagers Erin and Shannon Gallagher has appealed to young people to leave down their phones and talk to people.

Patsy Gallagher made the impassioned plea after watching mum Lorraine bury her daughters just weeks apart after they took their own lives aged just 13 and 15 in 2012.

The inquest into the death of Shannon, aged 15, heard this week how she took her life on December 12th, just six weeks after her sister Erin, aged 13, did the same on October 26th, 2012.

Mr Gallagher said the case was unprecedented and appealed to young people to learn lessons from Shannon and Erin’s deaths.

“If I could say one thing to teenagers today it is simply this ‘Put down your phones.’ I would ask them to move away from technology if they are going through a tough time and talk to someone.

“They will not find their answers on a phone but they may find some answers by talking to people, be it a teacher or just a friend.

“I have seen what Erin and Shannon went through and I would not wish that on any other child. They could not find peace on their phones,” he said.

Letterkenny Coroner’s Court this week returned a finding that Shannon died by suicide.

The Ballybofey teenager was found dead in her bedroom at her foster home where she had been staying for just 12 days before she ended her life.

She had been wrapping Christmas presents for her family and even wrote a note to her mum Lorraine saying how much she loved her and missed her just hours before she died.

Shannon had gone into a voluntary foster home as herself and mum Lorraine tried to work out their differences just weeks after the death of her younger sister Erin.

Mr Gallagher said mum Lorraine was coping as best she could but this week’s inquest was particularly difficult for her.

“She is trying to get on with her life as best she can but it’s at times like this that everything is brought back up again.

“I know she would want the same message to go out to encourage all young people to talk about their problems to someone face-to-face.

“She would never wish what happened to her on anybody else,” he said.