Kilcar ended their 24-year wait for Dr Maguire after a three-point win over Naomh Conaill in a poor county final.

The quality of the fare on offer will matter little to Kilcar and as forgettable as it might have been for many of the 6,930 in attendance, it will rank as one of Kilcar’s most memorable hours, as they finally get their paws on Donegal football’s most sought-after prize again.

Since 1993 they wait to take their seat on the throne and they were crowned again after a game that will go down as one of the poorest county finals in memory.

But to those in the blue and yellow, the fact that Dr Maguire goes ‘down the trough’ after more than two decades is all that matters.

Winning was their sole objective – and they did just that as they made up for last year’s defeat to Glenswilly.

They looked anxiously at the watches as the minutes ticked down, but now they take their place in the pantheon once more. Stadium announcer Fergus McGee’s calls for spectators to stay off the pitch always seemed in vain and there was no restraining the huge crowd that flocked from the south-west.

Just two points were scored in a second half that saw Naomh Conaill reduced to 13 men as Dermot Molloy and Eoghan McGettigan were dismissed.

Kilcar were 0-6 to 0-3 in front at half-time, but a barren spell followed. 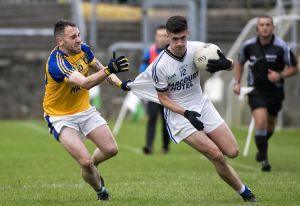 It was only after 14 minutes and 48 seconds of the second half that the next score arrived, Eunan Doherty cutting the Naomh Conaill deficit with a neat point off the outside of his right peg.

Kilcar failed to score for 21 second-half minutes, until Ryan McHugh conjured a piece of brilliance to arch over from 45 metres and steady their wobbles.

That score by McHugh, Kilcar’s first in 24 minutes of action, was their only point in the second period.

Had Naomh Conaill had their shooting boots in tow, they might well have been in front but, as it was, Brendan McDyre and Leo McLoone fired off target and Molloy was unfortunate to strike against an upright.

Molloy, already booked, was sent off five minutes for the end when he was black carded for a foul on Michael Hegarty.

McGettigan followed when he caught Mark McHugh high and late in added time, leaving Naomh Conaill down to 13 men.

Naomh Conaill had the shutters firmly nailed down, conscious of a semi-final meeting from last year that they’d lost 5-10 to 1-11. 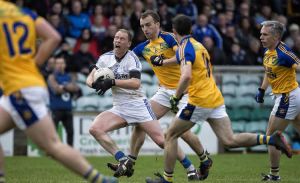 What had been forgotten in the 12 months since was how Naomh Conaill had actually led 1-3 to 0-1 after nine minutes of that contest.

Captain Patrick McBrearty boomed over from 40 metres in the 19th minute and the Kilcar voices on the concrete terraces found their range too.

Two minute slater, at the stand side and from a position that had the odds against a left-footed kicker, McBrearty signalled the intent with a splendid free to put two between them.

Veteran Michael Hegarty widened the margin and McBrearty made it a four-point game, but Dermot Molloy’s free had Naomh Conaill within three at the short whistle.

Earlier, Molloy sailed over a free from the edge of the D, brought forward with the former Donegal player having initially been lining the target up from just beyond the ’45 to level things up for the second time in the 11th minute.

Mark McHugh had given Kilcar the lead in the opening minute only for Ciaran Thompson to hoist over form distance.

Molloy’s free came after Conor Doherty curled over and Ciaran McGinley shot off the upright with the alert Leo McLoone picking up the pieces when Kilcar smelled a kill.

Kilcar were 0-6 to 0-3 in front at the break, when there was a feeling that both camps would’ve been content with their lot.

The second half didn’t catch fire at any stage, until those late moments when Molloy and McGettigan saw red and, finally, Kilcar struck gold.