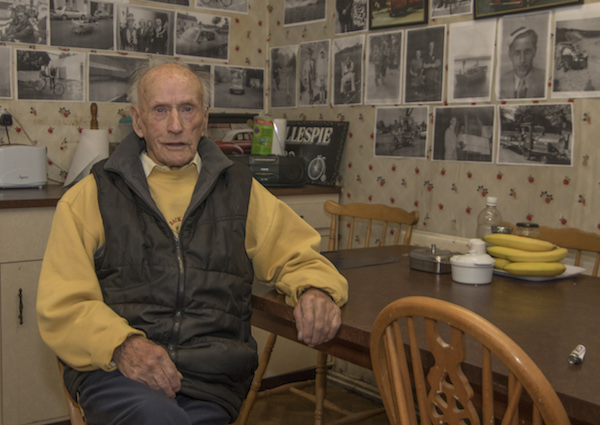 A fundraising campaign to get a new security system installed in the home of a 100-year-old man who was robbed by three masked men has reached its target in less than 24 hours.

People were left feeling disgusted after the gang broke into the home of popular Pat Gillespie.

Two of the gang held Pat’s arms while a third thug went through his pockets stealing an amount of cash he had hidden.

Pat, from Railway Road, in Strabane, was not physically assaulted during the raid on Friday night last but was left very shaken.

A fundraising campaign to get a security system for widower Pat, who lives alone, reached more than £1,485 in just a few hours.

A reward for information leading to the capture of the heartless gang who set upon Pat has also been doubled by two local businessmen.

The gang gained entry through a back door of Pat’s home at Railway Street before taking a panic alarm from around his neck.

Two of the men held his arms while a third man went through his pockets and found a sum of money.

Thankfully the raiders did not assault their victim.

The men, who did not speak during the raid, did not go through any other rooms in the house but fled very quickly.

Pat’s son-in-law Danny Kelly said yesterday that there was a feeling that Pat may have known his attackers.

“They seemed to know that he may have a few pound on him and that’s what they went for. They were masked and didn’t say a word.

“They took the panic alarm off him very quickly and that was found on the floor later.

“We feel it’s all a bit suspicious that they didn’t ransack the house or go through the drawers looking for more money.

“Pat is so well-known and he uses his electric scooter around the town. They could have been watching him and they could even know him,” said Danny.

Pat is well-known through the border town where he visits his late wife Eileen’s grave every day to pray.

He dabbles is fixing old bikes and cars and even has a mini-transport museum at his museum which thankfully his attackers did not damage.

Police carried out a full investigation at Pat’s home today in the hope of finding clues which may lead them to the callous attackers.

Son-in-law Danny added “How can anybody plan to do such a thing to a man who is one hundred years old or anybody else for that matter.

“Pat is such a lovely man living out the final years of his life and hopefully did will not affect him too much but we are obviously very worried for him.

“Hopefully the police can get enough evidence together to find out who did this and bring them to justice.”

Amazing community response hopes to give shaken Pat some peace of mind was last modified: October 30th, 2017 by Stephen Maguire