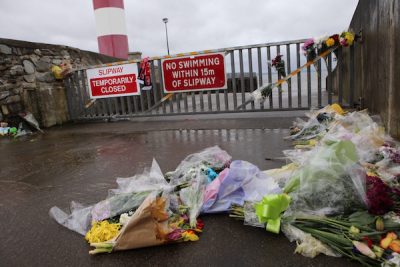 The driver of a car that slipped off Buncrana pier in which five people drowned was more than three times over the drink-driving limit.

The evidence was given at the inquest into the deaths of five people on March, 20th 2016.

Dr Dillon said that she examined the body of the late Mr Sean McGrotty at Letterkenny University Hospital.

After various medical examinations which found lacerations as well as cuts, Dr Dillon said that death was due to drowning.

However, Dr Dillon said that an examination of the body found that there was a level of intoxication in Mr McGrotty’s body.

She said samples taken from the body of Mr McGrotty and sent to the State Laboratory.

The reading returned showed the driver of the Audi Q7 jeep had a blood alcohol level of 159 millilitres.

Dr Dillon said the drink-driving level in this case was 50 milligrammes of alcohol per 100 millilitres of blood.

On cross-examination, Dr Dillon said she couldn’t say what level of impairment such a reading would have as it depended on each individual’s capacity.

“I can’t say what level of impairment there was,” she said.