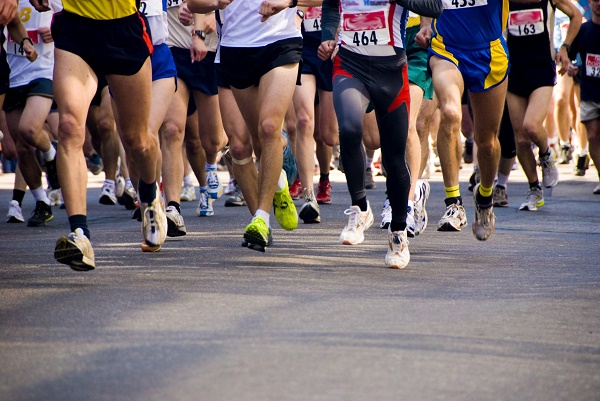 written by Chris McNulty December 5, 2017
Facebook0Tweet0LinkedIn0Print0
Danny Mooney stormed to second place in the 27th running of the Donore Harriers’ Jingle Bells 5K in Phoenix Park, Dublin on Saturday morning.
Danny crossed the line in an excellent time of 14.30.
There were 1052 runners in a race that featured many of Ireland’s top runners. The race winner was Leevale AC’s Mark Hanrahan in 14.13. The quality of the race was shown by the very large number of sub 16 minute finishers- 35.
In Sunday’s ‘Turkey Trot’, a  positive correlation between predicted time and actual time, rather than fast running,  was what was needed to bring home the Christmas dinner.
However, Danny Mooney was able to combine both, as well as displaying his immense powers of recovery. He was one of the turkey winners when his winning time of 15.03 was just 2 seconds outside his prediction. LAC man Paul Lee was the only runner who achieved his exact prediction when he clocked 23.00.
Like Danny Mooney, 2 other runners- Jackie Harvey and Natasha Kelly- also came within 2 seconds of their predicted time. LAC M60 runner, Brian McBride, was 3 seconds outside his predicted time and club captain Raymond Birch and Fergal Callan were 4 seconds away.
Maureen Doherty and Vera Haughey were 5 seconds outside of their prediction and the turkey winners were completed by Jessica Roberts and Noreen Sharkey, whose prediction varied by  6 seconds from their actual times.
Eoghain McGinley followed up last week’s 10K PB with a 5K PB of 15.07 and one of his New Year’s resolutions will now surely be to attain a sub 15 minute 5K. Eoin Hughes 16.00, Donal Farren 16.17 and Raymond Birch 16.31 completed a 100% LAC  top 5.
Due to the nature of the race, club names were not listed. However, one of the highlights, from a club perspective, was in-form Nakita Burke’s PB of 17.08.
This was a mammoth 30 seconds, or almost 3%, off her previous best. Fionnuala Diver turned in another fine performance and clocked 18.06.
Everyone at LAC was delighted to see the return to action of Darren Price. Darren underwent major back surgery last year and  he will be well pleased with this performance.
Darren ran an excellent time of 19.54, which was 2m36s faster than he had been expecting.
There were a large number of other excellent performances from LAC runners.
The club is grateful to ‘Voodoo Venue’ for the generous backing of the ‘Turkey Trot’.
In last week’s Junior Men’s National Cross Country Championship in Dublin, run over a 6K course,  3 LAC runners illustrated, again, that the future of the club is in good hands. Donal Farren was 13th, Matthew Johnston 19th and Eoin Hughes 30th.
Also, last week, in-form Sinead Jennings was the 2nd female international in the Great Ethiopian Run in the capital city of Addis Ababa. Sinead was 1 of 70 Irish runners and of 46,000 participants.
In Saturday morning’s Letterkenny parkrun, young Ryan Bradley was again first in the JM 10 category and his time of 23.45 was the fastest of his 3 parkruns to date. Noel Lynch was 2nd in the M45+ category in a time of 23.54. Peter McLean, participating in the event for the 59th time, was 3rd in the M55 age group  in 28.21.
There was 1 Match 3 winner of this week’s LAC Lotto- Terri Boyle.
Letterkenny AC: Danny Mooney storms to second-place at Phoenix Park was last modified: December 5th, 2017 by Chris McNulty
Facebook0Tweet0LinkedIn0Print0
Tags:
Danny MooneyLetterekenny ACletterkenny