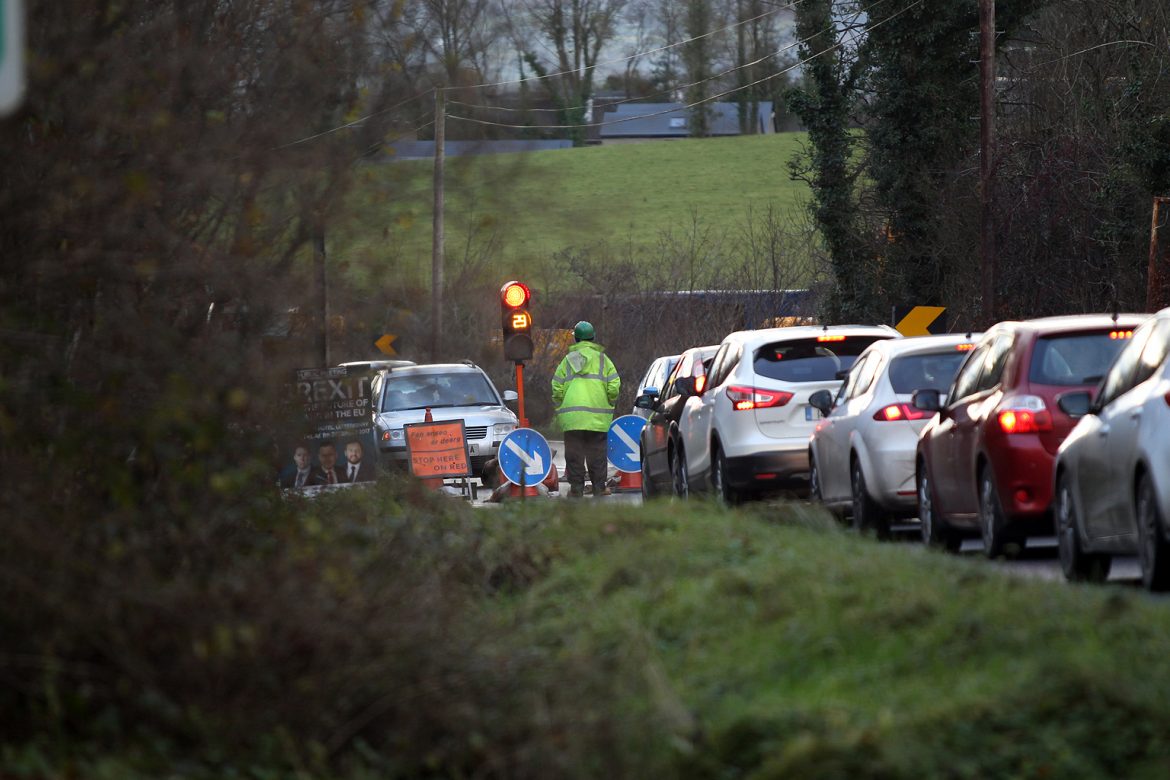 I am literally standing on the brakes. My arms push my back into the seat as I adopt a crash position and hold on to the steering wheel knowing this is not going to end well.

This was the week I had planned to do an end of year write-up on my wee Fiat Dobló and here we are brakes full on as we brace ourselves for a crash landing into the back of a brand new Audi A4.

Although this is happening at a lightning-fast pace, the outcome of it seems to take forever to happen. Will I hit the rear of this Audi or try and aim for the road sign notifying us of a Bazaar in Aid of Concern with support act, Lisa Mc Hugh in Jackson’s Hotel along the side of the road, or will I head for the early Brexit election sign beside it further down the road?

Going for the Brexit option and leaving the road and heading for the ditch has its risks but time is against us here as that German Audi is looming big through the windscreen.

Do what as I say not what I do
My mind wants me to go around the inside of this Audi and head for the ditch but my body is just welded to the footbrake and steering wheel in panic. Here is me always preaching away about keeping a safe distance from the car ahead and I’m about to go crashing into a car in front of me!

Our location is on the N56 past Kilross Junction heading from Stranorlar at the temporary traffic lights for the road and flood repair work. It is rush hour on a dark, cold Friday evening. It’s not freezing but the roads are greasy from gritting.

On the road out of Letterkenny the traffic was very heavy and for me I had they extra distraction of a car driving very close on my rear bumper, I dropped back a bit to let them past but they didn’t take up the offer, just remained on my rear bumper.

When we got as far as Kilross the traffic was moving more freely than normal. This could have been the result of the traffic lights ahead up the road which was leaving gaps for cars to get out at the junction.

As we head towards the location of the traffic lights a full section of cars are coming in the opposite direction in a group their lights blinding everyone. The inbound towards Stranorlar has spread out a bit before the traffic lights bring them to a halt. All of a sudden it was like the bellows of an accordion in reverse as all the cars came to a complete stop even though our light for go was still on green!

One year of driving this Fiat van which I bought as a demo with only 27 miles on the clock now it has covered 21,361 miles with little more than a couple of gentle nudge marks from cars opening doors in carparks and here it is within 20 yards of this accident as it’s just about to celebrate its first year on the roads of Donegal with an unmerciful bang.

Had the boys in Germany or Italy applied another coat of paint to the Audi or my Fiat we would have touched. That’s how close I ended up at the back of the Audi but somehow we didn’t crash. The only casualty from this incident was a Canon Flash which went flying from the passenger’s seat and demolished itself against the dash in the heavy braking.

As we came to a stop the Audi just started to move off as if by magic possibly unaware of what happened behind it. The van is now sitting a bit sideways on the road but no damage was done, thank god.

The brakes, tyres and anti-skid devices all did their job perfectly. The survival space did work but only just, it was driver error on my part to not notice the car in front of me stopped that was the biggest cause of this possible accident.

Counting the cost
I came away from the traffic lights with €600 worth of damage to my camera flash which had to be replaced and I was very happy to get away with it. Over the weekend I have passed through those traffic lights about six times.

On the night of my incident the thought cross my mind that these lights were not well signposted but a daylight run through the section of road I was to discover that the council had more warning red flags on it than a narcissist’s notebook!

That’s the thing about narcissists, if any of you were ever unlucky enough to have any dealings with one, you will well know that you never see the “red flags” to well after the event.

The council had eight warning signs from over 900 meters before the traffic lights on each side of the road to the road works, that’s a total distance if 1800 meters or a mile of warnings in old money.

Because I didn’t have an accident on Friday night last, I can talk about this and share my experience on what I did wrong in the hope that someone might learn from my mistakes.

The difference in what the same roads works look like at night as they traffic comes to a stop at the traffic lights at the road works.Photo Brian McDaid

I also think respectfully of the number of accidents I have attended on the N56 between Letterkenny and Stranorlar from 1985 as a fireman and only know too well how many families that have lost loved ones along that road.

Keeping your distance in normal driving situations from the car in front of you is one of the most important things you can do.

It gives you space to react to changes on the road in front of you, as long as you are paying attention, not like me!

Everything is against a driver in the winter months especially when there is no snow.

When there is snow people slow down. When there is no snow, roads are still treated which give us a false sense of security that they are not slippery but they are.

Low temperatures cause normal everyday tyres to have less grip on the road but we still try and cover the same journey in the same amount of time. We are still risking life and especially on the rush into Christmas.

Today this wee Fiat Van that avoided an accident on Friday night last on the N56 will undergo its PSV for roadworthiness at the PSV test centre which is also along the N56 out of Letterkenny.

Whatever the outcome of its test it will be, it will be nothing to the test it passed with honours on Friday night.

One year of motoring on the roads of Donegal and The Fiat Dobl has covered over 20, 000 miles without a bother Photo Brian McDaid.