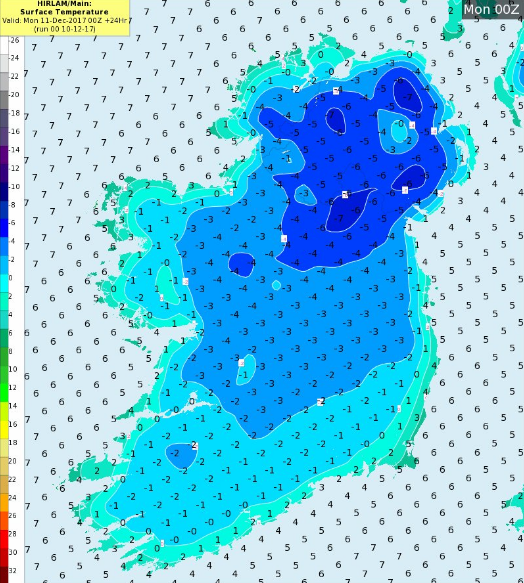 Warning issued as temperatures to dip to -8

Met Éireann has issued a Low-Temperature Warning, saying that temperatures could dip to a bitter minus eight tonight.

The warning is valid between 8pm tonight and 10am tomorrow morning.

The regional forecast indicates that the frost and ice will persist in sheltered areas tomorrow, with dry and sunny weather expected. There will be some scattered hail showers, with maximum temperatures between 2 and 5 degrees. Northerly winds will add a nip to the air.

“There is a real mixture of weather across the country this morning from icy conditions and sunny weather soon in Ulster,” said Met Eireann forecaster Evelyn Cusack on RTE’s Morning Ireland.

“Over many other areas there has been some very heavy rain during the night up to 30mm since midnight. That rain has converted to snow over many midland and western areas. We’ve heavy snow occurring at the moment with temperatures at zero degrees.

The Status Orange Snow warning for Donegal was lifted yesterday afternoon, with a band of snow sweeping over the lower half of the country.

The Snow warning currently only applies to Carlow, Kildare, Kilkenny, Laois, Longford, Wicklow, Offaly, Westmeath, Galway, Roscommon and Tipperary. In these counties, Met Éireann predicts that they will be struck by snow showers until 9pm tonight.

Further falls of snow, rain & sleet over the southern half of the country, moving slowing southwards this afternoon & eve. Clearer weather with frost following from the north. Temps of just 1 to 3°C. This evening temps will quickly drop to zero or below with frost & ice forming. pic.twitter.com/Nkp4g36S0I