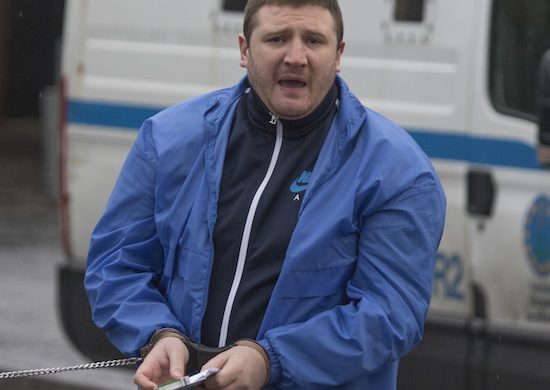 A man who turned to a life of crime after his father was murdered by the IRA has been jailed for three years after going on a crime spree in Co Donegal.

Gary Brodie had to be extradited back to Ireland from Scotland to face charges of assault, robbery and criminal damage in September.

The 33-year-old fought the extradition claiming he would be killed by the IRA if he was brought back to Ireland.

Brodie, who has been in Castlerea Prison since September, pleaded guilty to all charges put before him at Letterkenny Circuit Court today.

There was heavy security at the court after Brodie had spat at and had threatened a Detective during a previous sitting.

Detective Garda Michael Galvin gave evidence of bringing Brodie back to Ireland to face the charges.

They include smashing windows in the Anglers Haven Bar in Kilmacrennan on May 26th, 2007 in which more than €1,000 of damage was caused.

In November of the same year Brodie and two other men robbed another man at the Ramada Hotel in Letterkenny.

The three men had been socialising with another man, Sean McCullough, who had told them he had recently come into some money.

When they left the hotel the three men assaulted Mr.McCullough, pinned him to the ground, robbed him of jewellery and also more than £2,000 in sterling.

There had been an altercation in a toilet with a friend of Brodie’s and when he came out, Brodie broke a bottle over his head and then stabbed him with it.

On March 5th, 2008, Brodie again used a broken bottle to stab two other men when an altercation broke out at Burnside Apartments in Letterkenny.

The court was told that four witnesses in the various cases had declined to come to court to make victim impact statements.

Defence barristers Fiona Crawford and Peter Nolan both said that Brodie had turned to crime after not being able to deal with the disappearance of his father when he was aged just ten years.

He was on anti-depressants in Castlerea Prison and was a “stranger in a strange land” because of religious background and not being Irish.

Judge John Aylmer said he was reluctantly imposing a series of concurrent sentences on Brodie.

He sentenced him to a total of three years in prison but backdated to June when Brodie was taken into custody in Scotland.

Man whose father was murdered by IRA went on crime spree in Donegal was last modified: December 15th, 2017 by Stephen Maguire