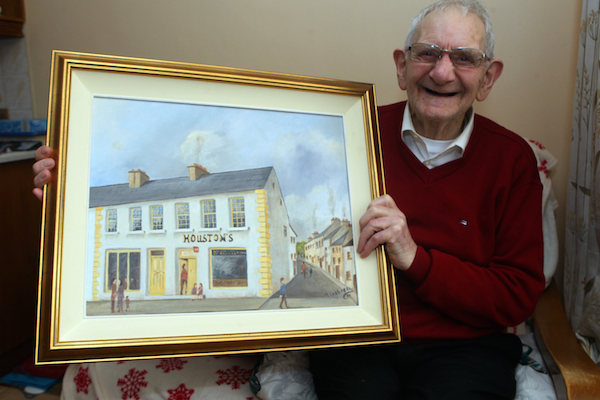 One of the most well known senior citizens in Letterkenny Jim Houston was in an accident before Christmas at the top of the Church Lane, a street that he has spent most of his life living on. Thankfully he is home from hospital now and recovering well out his sister Olive James home in Ballymacool.

Where were you born?

I was born in the Port Road in Mc Kinney’s Old house where Oatfield Sweets where first made. We lived in that house before Patrick Tinney bought it.

What is your fondest childhood memory?

I loved heading down to Larkin’s Bakery with my father Denis who was a shop owner as well as a bread man he delivered bread for Larkins bakery. We would load the van early and head out to deliver around the houses.

What are your memories of your shop?

Our shop, Houston’s was a busy shop on the main street In Letterkenny at the foot of the Church Lane. We lived upstairs above the shop. We also had a shop at the side which we also owned and rented it out to Jim Foody where he started his business the Prefect Tailors. That same shop was also rented by Neil T. Blaney T.D. where he launched his successful election runs for Europe and the Dail. Above that shop was where O’Leary the dentist was based. 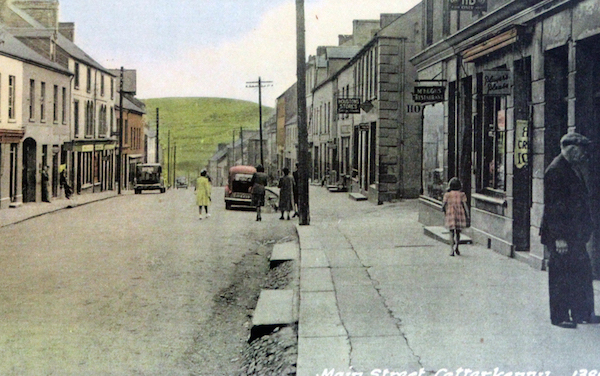 Thats our Olive when she was a girl heading down the Main St. In Letterkenny on the right. In them days there was plenty of room for cars and people now there none with all the new street footpaths and trees and arches.

What is your favourite food?

Everything, I’ll eat anything that won’t eat me, I don’t like curry though.

What is your favourite song?

Adeste Fideles is my favourite song ( O Come all ye faithful) love it especially around Christmas.

What was your proudest moment?

I Was so proud to raise over €3,500 at my 80th birthday and give it to a great cause like Mary’s Meals that do some great work in the community

Where did you work when you were young?

I worked for Alexander McKay who were wholesale agents based at the Market Square for years, I really enjoyed it. 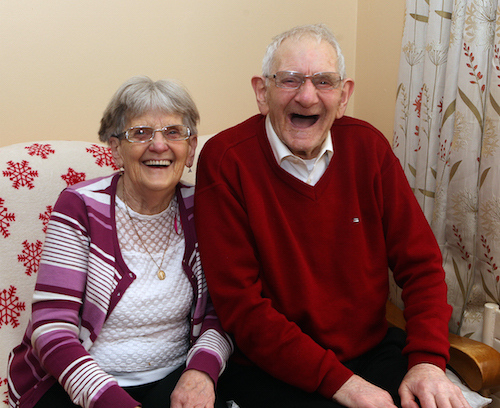 Jim Houston with his sister Olive James enjoying a yarn on Boxing Day at her home in Ballymacool. Photo Brian McDaid

Where are the destinations you have visited?

I love going over to see my family who live in England and also made a lot of pilgrimages to Lourdes. On the second Wednesday of every month I still go down to Ards with the Third Order of St. Francis. There were loads going down years ago from Letterkenny, now they’re not so many.

St. Eunans Cathedral is my favourite place, I go up before seven every morning and give them a hand to open the gates and get ready for eight mass. Then I also go up to ten mass as well.I give them a hand if they need it and I close the gates every night.

I once liked Letterkenny Main St. But I think they made it far to narrow, I have seen the Fire Brigade and the Ambulance getting stuck in the traffic one night. That’s our Olive in the old picture when she was a girl heading down the Main Street in Letterkenny on the right. In them days there was plenty of room for cars and people but now there’s none with all the new street footpaths and trees and arches.

If you were given a magic wand and was granted one wish what would you wish for?

I have a memory of my grandfather James Houston who I am named after who was also a bread man in his day. He delivered the bread by horse and cart. I can still see a photo we once had of his bread cart and horse in those days in my mind but don’t know where that photo is now, I would love if that photo would appear, just by magic!

(Jim was in conversation with Brian McDaid.) 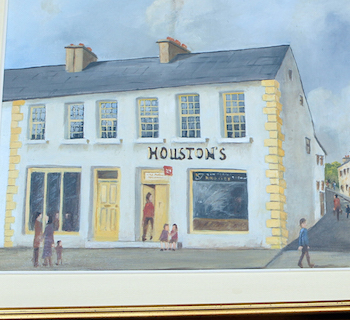 Houston’s Shop on the Main St. In Letterkenny. With the family residents above it , to the left , the shop was rented out to Jim Foody where her started his business the Prefect Tailors. That same offices was also rented by Neil T. Blaney T.D. where he launched his successful election camp again for Europe and the Dail , Above the shop was where O’Leary the Dentist was based.