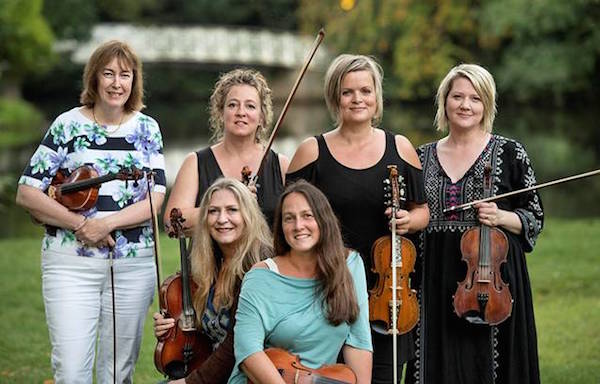 Why everyone should pull a few “strings’ to get along to this one-off event!

Letterkenny Trad Week is set to bring local audiences a unique one-off concert experience not to be missed.

The concerts sees the only Irish performance and the Irish launch of the eagerly awaited new album ‘Between Wind and Water’, by the internationally renowned String Sisters, featuring six of the world’s finest female fiddlers, at An Grianán Theatre, on Sunday, January 21st.

The performance is one of only three Irish and UK concerts following headlining appearances at Glasgow’s Celtic Connections and the prestigious Sage Gateshead (Newcastle).

The richness and diversity of the programme on offer ensures that there will be few, if any, better traditional concerts to be enjoyed anywhere in Ireland this year.

The concert opens with a new composition written by Mairéad Ní Mhaonaigh that will be premiered on the night by Coirm, the brilliant young group from Letterkenny’s Ceol na Coille traditional Irish music school.

The concert starts at 8pm and tickets can be booked at An Grianán Theatre on 0749120777 or www.angrianan.com

Why everyone should pull a few “strings’ to get along to this one-off event! was last modified: January 15th, 2018 by Stephen Maguire
Facebook0Tweet0LinkedIn0Print0
Tags:
An Grianan TheatreletterkennyString Sisters