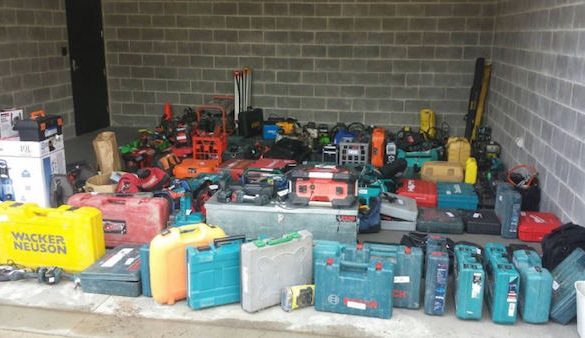 A Donegal Garda Sergeant has appealed to people not to buy cut-price work tools if they suspect they could have been stolen.

Crime Prevention officer, Paul Wallace, was speaking following what has been described as an epidemic of tool thefts across the country.

Millions of euro in stolen tools are being passed on at markets and sold locally for cheap by gangs involved in the theft and distribution of such tools.

Sgt Wallace said that people should remember that a workman’s tools are his hands and stealing these tools is depriving people of making a living.

“If you steal a person’s tools then you are essentially chopping off their hands because they simply cannot work. It’s as simple as that. You are depriving them of making a living,” he said.

He pointed to recent raids at various supermarkets and petrol stations in Donegal believed to have been the work of the same gang.

The robbers broke into the premises using all sorts of stolen tools and then simply left them there as they made their getaways.

“It shows you that stolen tools can be accessed so easily and if they are stolen there is no trace of them form them being left behind,” he added.

He said that anybody who is considering purchasing tools at knocked-down prices from markets or from the backs of vans should ask themselves if they have been stolen and deprived a person of making a living.

“If the price has been knocked down then the chances are that it will have been stolen and we would ask people not to add to the trade by buying them.

“The simple fact is that if the demand for these stolen tools was not there from the public then there would be no supply,” he added.