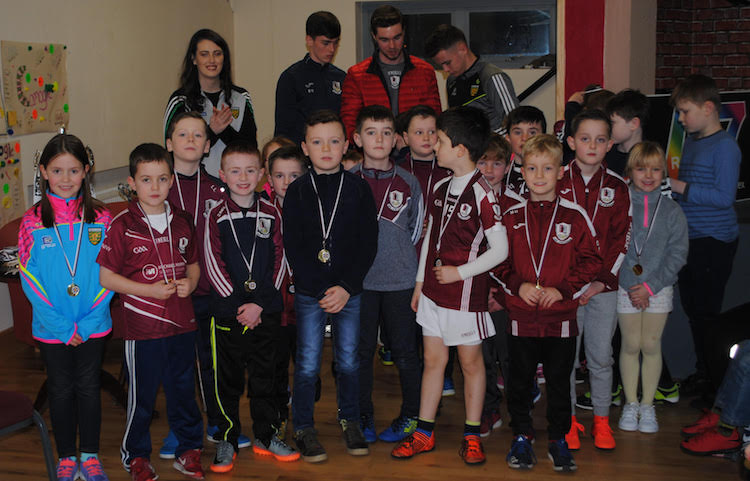 written by Chris McNulty January 23, 2018
A large crowd gathered at the clubroom of Letterkenny Gaels last Saturday evening for the annual underage football presentation.
The event rounded off a very successful year for underage football at the club.
The special guest on the night was Donegal Senior Ladies All Ireland Finalist Emer Gallagher from the Termon Club.
Emer was joined on stage by three very successful graduates from the Letterkenny Gaels Underage academy. Former Donegal U21s and Senior Club Player of the Year Shane Graham, Former Donegal Minor and Joint Minor Player of the year Shay Doherty and Ulster Colleges All Star Winner and Joint Minor Player of the year Brian Diver were all present.
PRO of the Underage football subcommittee, and MC on the night, Brian Sweeney presented a review of 2017 and looked forward to the coming season.
In a presentation called “Our Most Successful Year Yet”, Brian outlined how the Club was now fielding multiple teams across the age groups and the growth especially in girls football has been phenomenal.
Brian also outlined the plans for 2018. Indoor skills training will start for all age groups in February and the teams would start training at Pairc na nGael in early April (after Easter). Management and coaching teams were already in place and ready to go.
A key objective for 2018 was the launch of the new Underage Football Development Plan 2018 – 2020.  The unprecedented growth of underage football at the club over the last three years has been down to the structured and focused approach brought through the Underage Football Development Plan 2015 -2017 launched in 2015.  Brian Sweeney informed the audience that a new Underage Football Development Plan 2018 -2020 would be officially launched in March and would map out the next three years of underage football development at Letterkenny Gaels.
Club Chairperson James Frain then addressed the crowd and opened his speech by welcoming special guest Emer Gallagher, the large crowd of parents and children and the club coaches. James also acknowledged the effort that was going into the development of underage football and thanked the coaches and underage football committee for their efforts”.  James finished by encouraging club members to get involved in the Irish cultural, Irish language and social activities within the club such as Scór Sinsear and Scór na nÓg.
All the underage players received medals for their participation in the football activities throughout the year. Emer Gallagher and the three Gaels players presented the medals.  Emer also presented the U9 girls team with the Inishowen League Shield trophy and Gaels player Aileen Sweeney who won the player of the Shield tournament.
Brian Sweeney also acknowledged and thanked the contribution of the club sponsors. Enda and Claire Nicholls from Arena 7, Right Price Cars (John and Edel Margey) Kieran Barron from the Value Centre, Sweeney’s Spar and Send Mode and Pramerica were all thanked for their support and contribution to the underage football.
Under 6, 8 and 10 Underage football indoor training will resume again on Friday 16th February.  Under 6 training takes place each Friday at 6pm in the Woodland NS gym.  Under 8 and Under 10 training will take place in the Aura Leisure Centre from 11amto 12noon on a Sunday morning.  U12s, U14s and U16s train on different nights during the week.  New children are welcome to join.  Anyone interested should contact John McDermott (086) 856 1768 or Brian Sweeney (087) 228 2386 for any age groups. 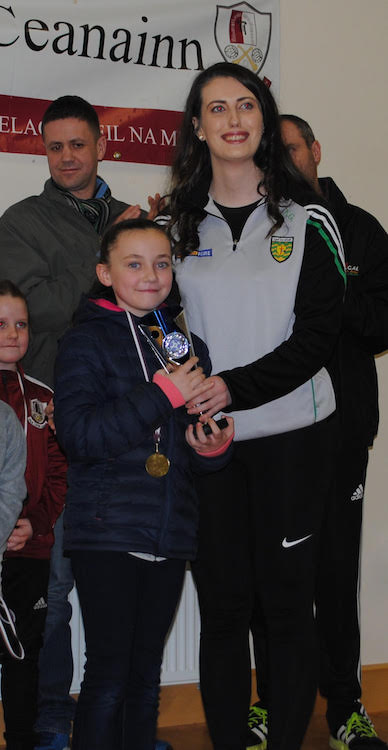 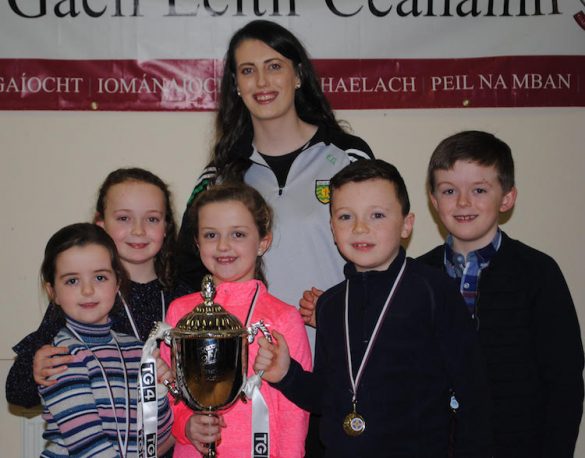 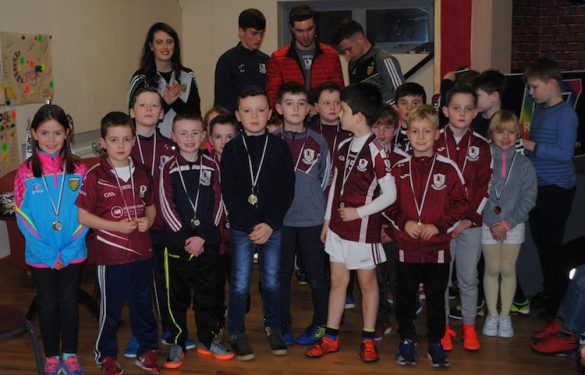 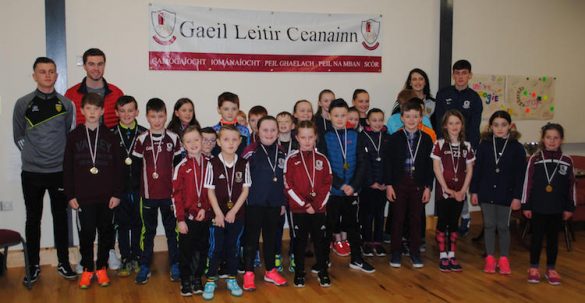 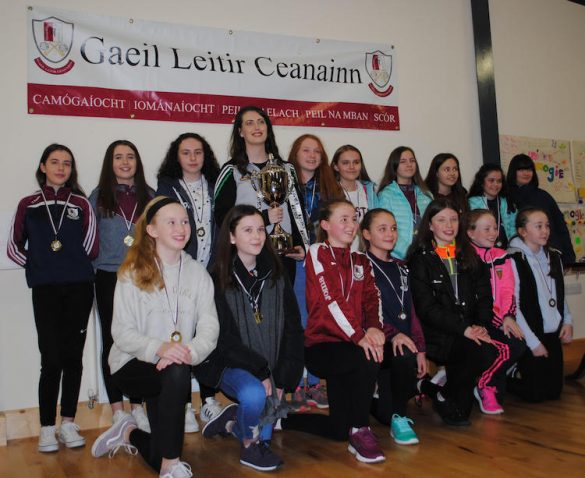 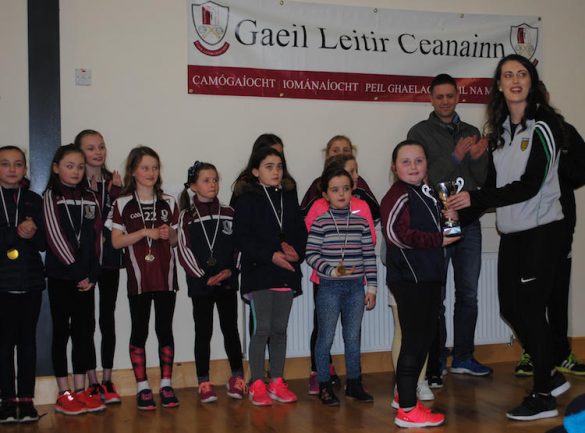 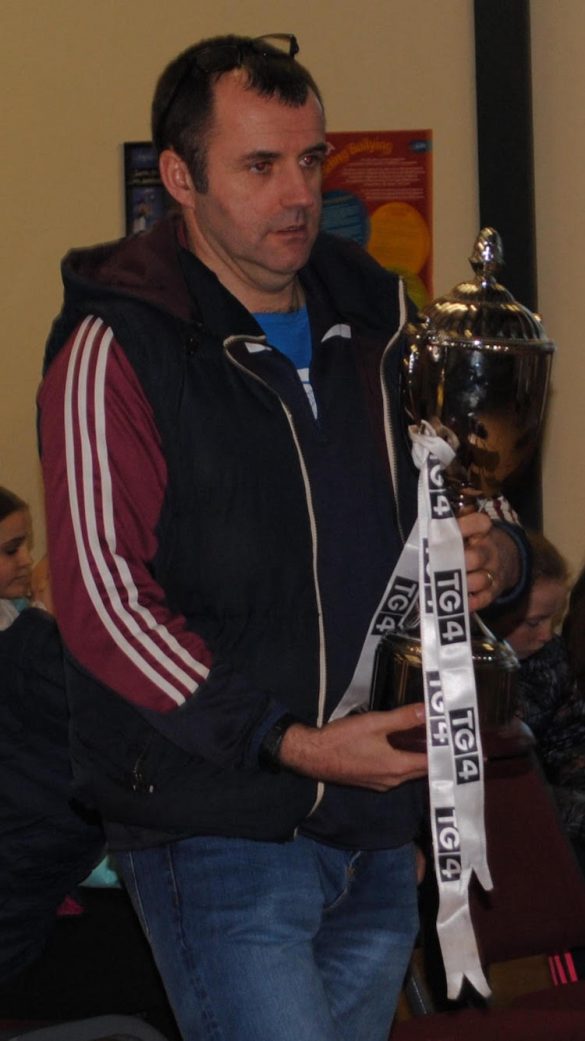