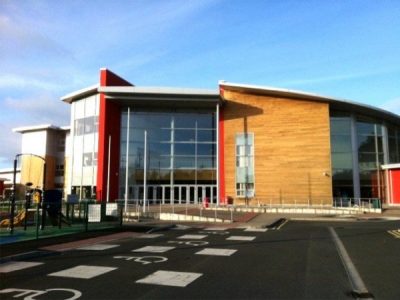 A young girl who slipped and fell while trying to get on a water slide at a leisure centre has been awarded €45,000.

The girl, who was aged 5 at the time of the accident on August 4th, 2013, was at the Aura Leisure Centre in Letterkenny, Co Donegal.

Letterkenny Circuit Court heard how the child was climbing steps up to a water slide when she slipped and banged her face.

The court was told that the child was unaccompanied at the time of the accident and out of sight of adults.

She was knocked out and bleeding heavily and was rushed to Altnagelvin Hospital in Derry.

She received treatment for a wound to her upper lip and also lost three teeth as a result of the fall.

Medical evidence was given that a scar on the girl’s upper lip has healed well and will continue to do so.

Orthodontist Dr Jeremy Worth carried out treatment on the little girl in the months after her fall.

He said that the child’s adult teeth have since erupted and appear to be normal.

However, he warned that some of the roots of these teeth have been bent and may cause problems in later years.

He said they may need future treatment and may have to be replaced.

Barrister Ciara Fitzerald, instructed by Seamus Gunne, said the girl’s family were happy with the offer of €45,000.

Judge John Aylmer asked to speak with the little girl and her parents in his chambers and then said he was happy to recommend the offer.

He also agreed to an application for a release of €500 for a trip to Disneyland, Paris.