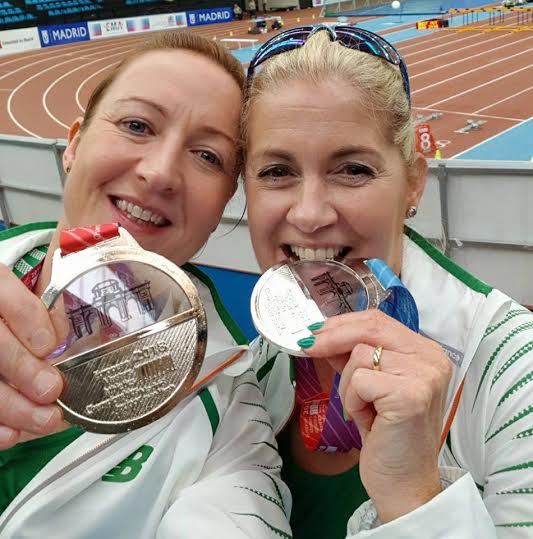 Yet another busy weekend in the ongoing story of Finn Valley AC and it began in Madrid Friday the venue for the 2018 European Masters Championships.

The local Donegal interest centred on Sinead McConnell and Margaret Reid members of the Irish 5k walk team travelling having performed well with a 1-2 in the Irish indoor Masters a few weeks previous.

They delivered positive individual performances Sinead closing in at 27.30 – her second fastest ever -and Margaret with a 30.06, a pb, and with the other team member from Kilkenny the exciting news that they were second team behind the hosts Spain but getting there ahead of strong walk nations such as Italy and Portugal.

It’s the culmination of 6 months hard work and a credit to both athletes who now can take a limited breather for a couple weeks and build towards other challenges possibly world championships in Malaga in September where Valley are planning to have a number of athletes involved .

Staying with walking and the international dimension Brendan Boyce returned to action in a 50k in Dudince Slovakia Saturday intent on covering 35k which he did working progressively to 2.40 odd and is currently in Morocco continuing his prep at altitude for World Cup in Taicaing ,China in May .

Also on the international scene, the sole Donegal selection on the International Schools at Nottingham Saturday was Oisin Toye from Deele College, the second Irish finisher individually, 16th overall, an encouraging performance once again from a dedicated young man who began his athletics at St Bridgets NS, Convoy .

National underage indoor champs continued Sunday in Athlone and there is another Convoy connection as Aine Kerr got in a jump of 11.03 in the triple jump to take the national title u18 and to say she deserved the reward for years of hard committed work is understating her achievement.

A medal also for Chris Kearns in the triple jump 11.70m and its generally understood that this young lad can go close to 1270 outdoors .

There was success also for Donegal sportshall team at Ulster level under Group leader Sharon Bradley and 3 teams have Q for UK finals now Manchester with Blaine Lynch ,Bethany Lecky and Leah McMonagle on board there.

Looking ahead to this weekend its Ballyliffin Coastal Challenge 1pm Saturday and we note 5 of the women completed the Wicklow half marathon last weekend hence congrats to them and Mark McPaul 2nd in Milford 5k.