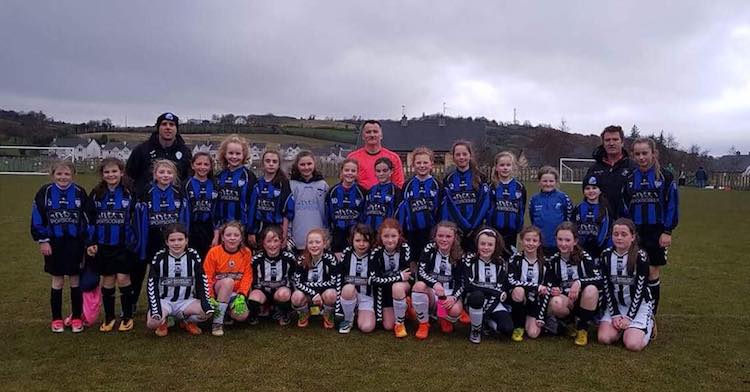 Plans are afoot to get the new North West Women’s Super League season started at the end of April with four teams from the DWL set to compete – Bonagee United, Fanad United, Lagan Harps and Swilly Rovers.

A late goal from Enya McBride made sure of the points for Raphoe Town in a hard-fought U12 encounter against Kilmacrennan at Deele College on Tuesday night.

The game fell foul of Monday’s downpours and was reversed but Kilmacrennan goalkeeper Maeve Brady made herself at home in the first half with a string of fine saves, but it was by no means one way traffic.

With captain Ella McHugh and the industrious Alicia McCullagh working hard for Raphoe, they carved out some great chances, linking up with Ella McCarron and Aine O’Flanagan on the wings to feed in busy striker Samara McBrearty.

She forced Brady into several fine stops, but Kilmacrennan had plenty of chances of their own and Raphoe goalkeeper Libby Sachs had to be alert on several occasions to prevent Sarah McFadden from breaking the deadlock.

Wing backs Cara Eaton and Enya McBride gave Raphoe an extra attacking option and a fine passage of play saw Samara McBrearty eventually race through to plant a low shot to the bottom corner of the net.

Kilmacrennan came close on several occasions to tying things up before the break but Raphoe who were well marshalled at the back by Aimee Connolly, took a slender lead in at the break.

Lauren Doherty and Alicia Gallagher turned in fine performances for the Kilmacrennan team as they searched for an equaliser and Maeve Brady tried her luck outfield in the second half showing some excellent touches.

However Mollie McGroarty and Hannah Goudie were excellent in defence for Raphoe, while Hannah McCarron, Chloe Jamieson, Kelsey Parke and Cliodhna Kelly all played well for the home side.

In the end it looked as if one goal would be enough to separate the teams, but right at the death a long-range effort from Enya McBride made its way through a crowd of players and into the net to make sure of the points for Raphoe.

Good team performances from both sides.

On a wet evening in Rabs Park, Kerrykeel, Mulroy Academy and Bonagee United under-12 girls got their campaigns off to a fine start with spirited performances from both teams.

The first goal resulted from a mis-clearance in the Bonagee nets, followed soon after by two goals from Eva Blaney.

Clodagh Herron put in a great performance with a goal in the first half, followed by three more in the second half.

Rachel Friel also played well adding to her team’s scoresheet. Megan Patterson displayed some fine saves throughout the match for Bonagee while Catherine Hopkins and Grace Murphy also performed well for the Letterkenny side.

Mulroy defence line of Kate, Meave, Hannah and the McLaughlin twins had very little go do all evening.

Mulroy u12 have a free week next week.

Illistrin u12 girls travelled to Gweedore on Monday for their first league match of the season.The away team settled well and took the lead when Eabha Daly played a lovely through ball to Leanne Mcgettigan who burst through and slotted the ball in to net.

The scoreline remained one-nil until half time mainly due to some very good defending from Gweedore and some fine saves from the Gweedore keeper.

Illistrin doubled there lead after half time when Sarah Robinson tapper in after good work from Orla McCrossan.

Leanne McGettigan then got her second shortly after when Lucy McKeever went on a nice run and found Leanne in space who slotted home.

Sarah McGinley got the fourth and just reward for all her hard work and effort in midfield.

This was a very good team goal with Orla Malseed and Riona McFadden. Working the ball well down the right and finding Sarah who finished well.

Grace Nugent rounded things off with a fine strike from the edge of the box for the fifth.