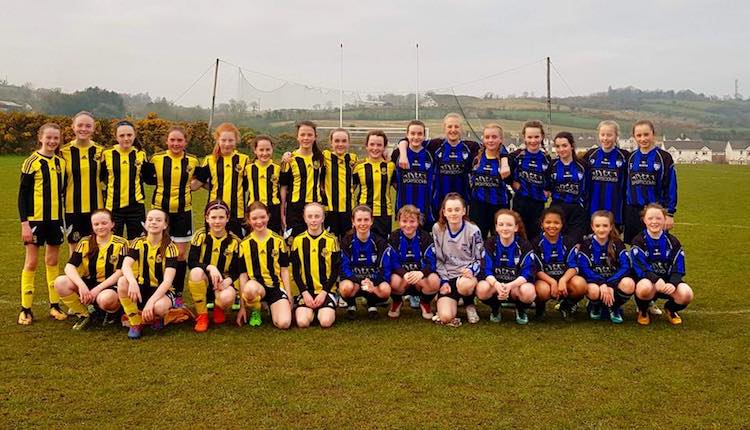 It was raining goals this week as the 2018 Donegal Women’s League seasons kicked off with the Under-16 and Under-14s following the Under-12s into action.

Pictured above are the Raphoe Town and Illistrin U14 teams

Both teams battled hard throughout the game and it wasn’t until the last 10 minutes of the game for Lagan to pull away from Swilly.

Lagan dominated for long periods in the first half but Swilly were the first to hit shot on target from Orlaith Connolly which was well saved by Neve Scanlan.

A good ball from Casey Barrett sent Holly Canning through on goal but her effort came of post.

Swilly were resilient in defence and battled hard. Ellie Duffy made a few good saves before Erin Doherty opened the scoring for Lagan on 37 minutes after good work by Lucy Canning and a cross by Orla McGrath.

Holly Canning had another effort sail wide when Emily McDevitt sent a through ball to her.

Luranna Hegarty was introduced by Swilly in the second half and was fouled at edge of box. Aisling Irwin stepped up to score a superb free curling it away walk into top corner.

Swilly came more into game after the equaliser and pinned Lagan back. Shannon Cunningham made a good solo run but her effort went just wide.

With 10 minutes remaining a long ball by Neve Scanlan sent Maria Bonar clear however she was fouled and penalty awarded which Shannon Cunningham converted.

Mulroy welcomed Raphoe tonight to Traigh-A-Locj on a fine evening for a game of football as they kicked off their new season.

Raphoe started the game strongly, playing well through the middle of the park.

Mulroy started to get a grip of the game with Caoimhe Heron dictating play in the middle along with Lisa Dugera and Emma Friel causing problems going forward.

Lauren McBride and Maria Doherty were both working tirelessly up front, with Lauren and Lisa Dugera both getting on the score sheet before half time.

The home side’s back four held firm after the break with Eimear Sweeney and Dearbhla McDevitt comfortable on the ball.

After a slow start to the half, Mulroy once again upped the ante with further goals from Lauren McBride and Iseult Ni Mathuna putting the shine on an excellent performance.

A team performance from a Raphoe side which will improve as the season goes on while a superb overall showing from Mulroy saw Lisa Dugera, Caoimhe Heron and Eimear Sweeney all shine for the home side on the night.

The U16 Illistrin FC girls made a great start to their inaugural season in the U16 Donegal Women’s League.

They played a very competitive Finn Valley team who battled the whole way through the game.  A special mention to Jodie McFadden who scored a hat trick and her replacement Ciara Molloy who scored two.

Jade Stewart made a fine debut with fellow debutant Meghan Walden putting the icing on the cake with a fine goal.  Orla Corry was impressive in nets when called upon and defenders Aobha McDaid, Megan McDaid, Zoe McFadden, and Alisha Tobin were excellent. In the midfield Aislinn Coll was inspirational with Ciara Doherty and Rebekah McGlinchey supporting well.

Finn Valley scored a great goal from Amy Lafferty.  Ellie White performed well and Caoimhe Brennan had a fine game in nets. Sean O’Donnell was referee on the night and kept the game flowing.

One goal proved to be enough to win this hard fought encounter at Deele College on Friday night, with both teams serving up some super football in a cracking match that saw really little between the teams.

Illistrin started the game brighter as Raphoe took a few minutes to find their feet, but with Rocha McCullagh, Abbey Lee Bell, Sadie Logan and Cora McBride in fine form in the Raphoe defence, the visitors struggled early on to test Lakiesha McCarron in the Raphoe goal.

Jody McFadden and Marie Rushe were excellent for a well-drilled Illistrin team and the midfield battle with Raphoe duo Rebecca McColgan and Codie Walsh was  fantastic to watch all night.

McColgan linked up several times on the left hand side with Clodagh O’Donnell, while Walsh and Abigail Asokuh Temple clicked for Raphoe on a number of occasions down the right.

However Darcy Kelly had a cracking game at the heart of the Illistrin defence and she battled gamely against Ella McHugh and Shania McMonagle to keep the home side at bay.

When chances did come at either end, the goalkeepers were equal to it. Aoibhin Randles making a number of fine stops to deny McColgan and McMonagle in the first half and Lakiesha McCarron twice saving well at the other end to deny Illistrin.

There was nothing to separate the teams at the break and it continued in a similar vein in the second half. Raphoe at this stage had Tammy Laird-Quinn linking well with Kacey Blackburn on the right and Abbie Sweeney making her debut on the left.

A thundering drive from Rebecca McColgan mid way through the half looked like it would finally break the deadlock, but Randles made a fantastic save to keep the teams on level terms.

With seven minutes left in the game Illistrin finally sealed the win. Jody McFarland sent a clever pass through for Ciara Molloy and she raced away to smash home a great goal and make it 1-0.

Raphoe pressed and pressed after that, but they could find no way through for an equaliser and Illistrin took the spoils from a super game of football.

Great efforts on the night from both teams in a game well refereed by Patrick Martin.

Finn Valley came back from the brink to earn a 2-2 draw with Bonagee United at Dry Arch Park on Friday night in a cracking encounter.

A brace either side of half-time by Hannah Hopkins had Bonagee in command, but never-say-die Finn Valley hit back with Hannah Gallagher and Aimee Lafferty on the mark.

Hopkins tried her luck early on, but riffled just wide while captain Caitlin Hume drove narrowly wide with a good attempt from distance. 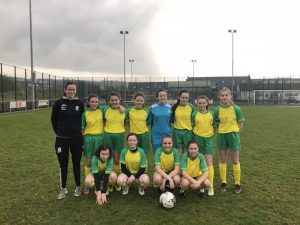 Lafferty went close for Finn Valley when she broke clear, but Bonagee survived the scare.

Just before half-time, Hopkins cracked home a brilliant goal for Bonagee after taking a pass from Alyeshia Alcorn.

On the re-start, Hopkins burst in and doubled the lead with her second of the night.

But Finn Valley were undeterred as Gallagher struck after Sarah Connagh was denied by Emma Doherty, the Bonagee goalkeeper.

Hopkins was inches away from her hat-trick when she hit the bar with a blistering shot.

With Bonagee just holding on, Finn Valley broke their resistance when Lafferty stole in for a dramatic equaliser. 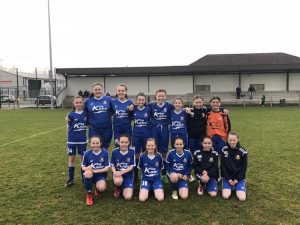 Mulroy started their season hosting Kilmacrennan and as usual it was a pleasure to have them in Rabs Park.

After sunshine all day we started with a light drizzle but they were ideal conditions for the game.

Mulroy were rapid off the mark with no time to waste.

Caitlin Heraghty opened the scoreline after 10 minutes with a mighty strike from 50 yards out to put the ball in the back of net – a superb goal from this young lady who is only back from injury. Kilmac pushed hard but found it tough to pass Mulroy midfield line.

Captain Maire Kerr with the aid of a perfect cross from Aideen Friel added to the Mulroy Scoreline. 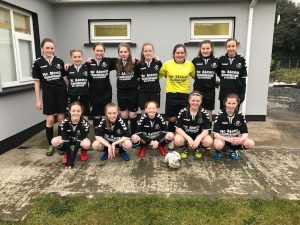 Iseult Ní Mháthuna, who was in her usual form, secured the third goal for Mulroy.

The second half saw Kilmac come out determined and played some nice defensive football. Katherine Black had a superb game and keep the Mulroy girls at bay.

Aoife Gibbons with some fine speed and determination secured another for Mulroy.

Kilmac keeper Eilish Russell had some excellent saves and can read the game nicely.

The small but lively Jessica Coll gave Mulroy the fifth on the scoreboard.

Caitlin O Hara showed great skill and fight for Kilmac, but the fast feet of Aoife Gibbons once again secured the 6th for Mulroy. Both teams played till the final whistle.

A very enjoyable evening of football was had by all. Good luck to Kilmac for the remainder of season.

Best for Mulroy was Caitlin Heraghty. Best for Kilmac was Katherine Black

Gweedore Celtic U14 Ladies hosted Gweedore Utd U14 Ladies for their first Donegal Womens League game of the 2018 season.

Conditions were perfect for the match with both teams playing great football and pushing for the opener.

It was the visitors who opened the scoring with a close range shot from Orla McFadden which Gweedore Celtic’s keeper Molly Kelly was unlucky not to prevent.

Gweedore Celtic ladies pushed for the equaliser and were rewarded after some fine play from Sile Ferry who chipped the United keeper to level the match.

The game was being played at a fast pace, moving from end to end with both teams applying pressure on the oppostion back four.

The hosts then took the lead after Chloe McCole received the ball on the edge of the penalty box, turned her marker and ran into the box and slotted the ball passed the keeper into the bottom left corner for a fine finish.

Gweedore United Ladies responded well after going behind and levelled the score with a great strike from Orla Ferry from the edge of the penalty box which gave the Celtic keeper no chance.

With the game level both teams pushed for the winner but both keepers did well between the sticks. Gweedore Celtic’s Maeve Boyle cracked the bar late on and United nearly won it with a long range shot but the Celtic keeper was equal to it.

A cracking local derby played in the best spirit which ended with the points being shared.

Donegal Women’s League – all the action from U14 and U16 games was last modified: April 14th, 2018 by Chris McNulty