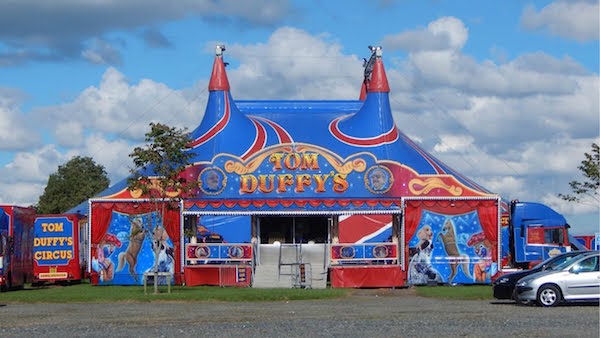 A number of people were hurt after a circus performer fell through a safety net at a circus in Donegal Town last night.

The incident happened during the evening performance of Tom Duffy’s Circus.

During the performance, a trapeze artist fell through the safety net onto a number of people below who were watching the show.

The performer, as well as at least one other person watching the show, was injured.

Two ambulances were called to the scene and were taken to Sligo University hospital.

The circus performer was immediately placed on a flat-board and stretchered away but is not understood to be seriously hurt.

One woman from Donegal Town, who was at the two-hour show with her two children, said the situation was handled very professionally.

“It could have been a lot worse. He appeared just to fall through the netting and into the crowd.

“I’m not sure how the people are he fell on but the circus performer himself didn’t appear too badly hurt as he waved to the crowd as he was being stretchered away.

“It seemed like one of those freak accidents but it could have been much worse.

“Hopefully nobody is seriously hurt as a result of it,” she said.

After a break, in which those injured were taken to hospital, the show resumed.

A spokesman for the Garda Press Office said they had not received any official report on the matter.

Duffy’s Circus has so far failed to return a query on the incident.

Duffy’s Circus, one of the biggest and best-known circuses in the country, continues with its tour across Donegal with shows in Letterkenny and Carndonagh.