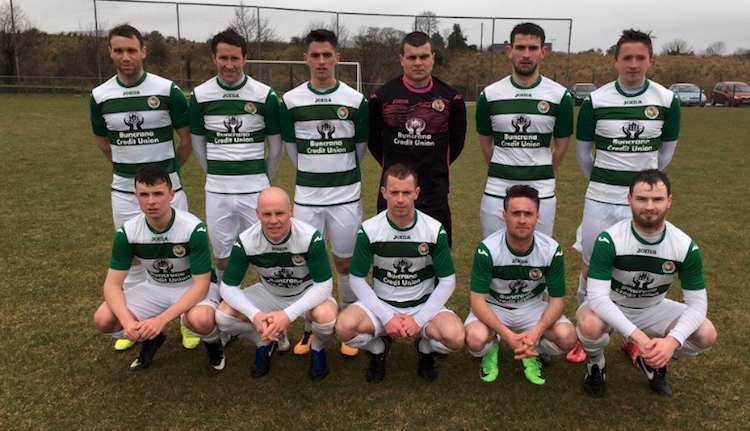 Laurence Toland, Gerard McLaughlin and Mark Moran, with a brace were both on target as holders Cockhill Celtic returned to the Donegal News Ulster Senior League Cup final.

Cockhill advanced to another League Cup final with a scrappy display against a committed Bonagee outfit.

There was a frenetic opening to the match with both sides scoring within the first three minutes.

Cockhill went in front when a Gerry Gill corner caused confusion in the Bonagee defence. While Gerard McLaughlin and Malachy McDermott had efforts blocked, Laurence Toland was on hand to force the ball home.

The game settled after this with clear chances at a premium. Ciaran Curran went close for Bonagee on 21 minutes when he shot narrowly over while Malachy McDermott headed over on 36mins when well placed.

The game was decided in a ten-minute period either side of half time. Cockhill nosed in front on the stroke of half time when Ronan Doherty’s teasing cross from the left was bundled home by Mark Moran.

On 53 minutes, it was three-one. Cockhill were awarded a disputed free kick on the left which Sean Hume headed away for a corner. The relief was short lived as Gill’s corner found the unmarked Gerard McLaughlin who made no mistake with a downward header from 8 yards.

Two minutes later the game was over as a contest when Cockhill got their fourth goal. Great persistence from Toland on the right forced the ball to Moran who cut in from the right to fire home a trademark finish.

Bonagee, to their credit, continued to compete and Deano Larkin was out of luck on a couple of occasions. First, his attempted lob was off target. Then a sharp turn and shot forced a save from Lee McCarron.

The remainder of the game was punctuated by substitutions and stoppages which suited the home side and they reach another final.