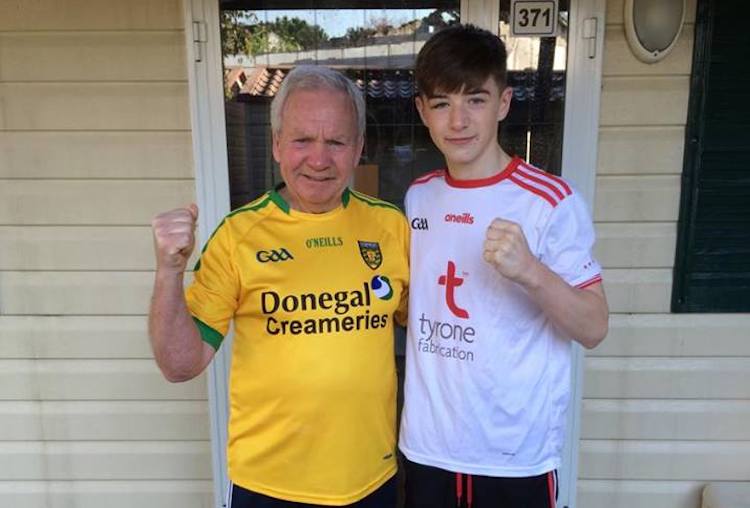 Irish boxers are performing well at the European Youth Championships in Italy with six medals guaranteed to return home later this week.

Six boxers have sealed at least bronze medals and will return to action tomorrow vying for a place in their respective finals.

Raphoe ABC’s Peter O’Donnell, the Donegal Boxing Board President, is manager of the Irish squad in Italy.

Peter O’Donnell pictured with Irish light-flyweight Jude Gallagher from the Two Castles ABC in Nwwtownstewart, who is one of six Irish boxers guaranteed at least a bronze medal.

The six are assured podium finishes and will be back in action in Tuesday’s semi-finals.

Gallagher beat Armenia’s Yeghikyan and Moorehouse and Rooney saw off Spain’s Marta Lopez and Croatia’s Nikolina Qamili, while Igharo stopped Antia Zilix, also of Croatia, in the first round.

Kelly, the last Irish boxer in action yesterday, held her composure and stuck to her boxing to beat Turkey’s Sena Erdogan and claim her third European medal.

Moorhouse faces Maxi Klotzer from Germany at 48kgs, Gallagher is against Atila Bernth from Hungary at 49kgs with Clancy facing Ukraine’s Yurii Tomiuk at 52kgs.

Kelly competes with Albania’s Elsidata Selaj for a berth in the 75kgs final, Igharo meets Maria Sedaya from Ukraine at 65kgs and at 57kgs Rooney takes on Valeria Radionova of Russia.