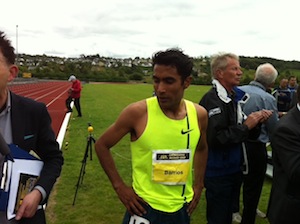 The Letterkenny International Track & Field meet, which had been a big attraction over the previous five years, will not be held this year, Letterkenny AC have said.

The event had been staged at the Danny McDaid track, but LAC have confirmed that it will not be going ahead this year.

The Letterkenny club say that they will ‘review’ the situation ahead of 2019.

“Unfortunately, due to circumstances outside of our control, we are unable to stage the meeting this year,” a statement from LAC said.

“The staging of the event will be reviewed again in 2019”.

“Over the past five years, we have witnessed exceptional performances from a host of world class athletes at the Danny McDaid Athletics Track. The 2014 event produced the first ever sub 4-minute mile on Donegal soil with double Olympian, Mexico’s Juan Luis Barrios, marking his place in history by stopping the clock at 3:59.43.

In 2015, there was another historic night when three Irish women etched their way into the history books as the trio of Kerry O’Flaherty, Michelle Finn and Sara Treacy all secured qualification standards for the 2016 Rio Olympic Games. Never before had three Irish women qualified for an Olympic Games at the same race meeting.

European and World champions & medallists, and numerous Olympians from over 30 countries have all graced the tartan track in Letterkenny, and this could not have been made possible without the support of our sponsors.”