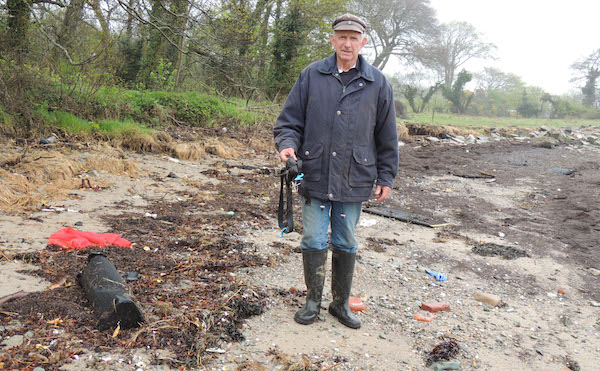 Plastic is not fantastic as fears grow for Lough Foyle

written by Stephen Maguire May 9, 2018
Facebook0Tweet0LinkedIn0Print0

An Inishowen farmer fears that large volumes of plastic and rubber currently washing up on the shores of Lough Foyle could be causing serious long-term damage to the local environment.

Much of the material is coming from the unregulated oyster farming industry, which has sprung up in recent years, with plastic bags, tags and rubber straps routinely washing ashore.

Billy Doherty, who has lived all his life at Whitecastle House on the shores of Lough Foyle, says the problem is worse than ever.

A walk along the foreshore in front of his 18th century home reveals scattered items of shiny plastic and rubber lying in all directions, byproducts of the thousands of oyster trestles in the water nearby.

In ten minutes he is comfortably able to collect approximately twenty thick rubber straps and tags. In recent months he has gathered more than fifty oyster bags. All this in a supposed area of special conservation for seabirds.

“The amount of waste is just unbelievable. You would have to see it to believe it. I’m fed up gathering it and no one seems to be taking responsibility for it,” he says.

“We have never seen anything like this before — and it has to be having a detrimental impact on the environment, particularly in the long-term.”

Billy says he has nothing against those involved in the shellfish industry but it must be properly regulated and monitored.

“I’m not faulting the local fellow trying to earn a few pounds but there have to be rules and regulations in any industry like this.”

“I don’t want to create a problem for anyone trying to earn a living but people need to take responsibility for the environment too. There has been no environmental impact study carried out here or planning permission granted for these trestles.”

To exacerbate the problem, no one seems to willing to tackle the issue, with the disputed nature of the waters of Lough Foyle contributing to perennial inaction from all sides.

“Nobody is doing anything about it. Both sides don’t want to know. They are ostriches burying their heads in the sand, hoping the problem will eventually go away — but it’s not going away. It’s getting worse.”

The problem is worse on the Inishowen side of the Foyle because it offers easier access to the shore.

Though the waste isn’t confined to the oyster industry.

Almost all of it could have been recycled.

“It really isn’t that hard for people to recycle. We have four recycling bins here and everything is easily organised once you start,” he says.

Who governs the waters of Lough Foyle?

The Loughs Agency is the authority that regulates Lough Foyle but it does not have the jurisdiction to confiscate the trestles on the Donegal shoreline.

Donegal County Council says the area below the high watermark is “not within our remit” but is instead governed by foreshore licences that are managed by the Department of Agriculture, Food and the Marine.

When asked why it doesn’t remove the oyster trestles from Lough Foyle, the Department of Agriculture Food and the Marine said:

“The exercise of jurisdiction within Lough Foyle is an issue the resolution of which will facilitate the licensing of aquaculture by the Loughs Agency in accordance with the intentions of the two governments under the 1999 agreement establishing North/South implementation bodies.”

“The two governments agreed in 2011 to address these issues in the round and officials have met regularly since then. The Irish government is committed to bringing these talks to a successful conclusion.”

Plastic is not fantastic as fears grow for Lough Foyle was last modified: May 11th, 2018 by Stephen Maguire
Facebook0Tweet0LinkedIn0Print0
Tags:
Billy DohertyfarmerInishowenLough FoyleplasticWhitecastle