Rhatigan Architects have been nominated in the category of Education Project of the year for their beautiful upgrade of Blocks C&D and the Aurivo Auditorium within I.T. Sligo

The upgrade of Blocks C&D and the Former Foundation Lab were commissioned by I.T. Sligo to facilitate their ever-expanding campus. Built in the 1970’s, the former RTC building had last been upgraded in the 90’s, whilst the area that the Aurivo Auditorium now occupies was a disused double height space in the heart of the campus. 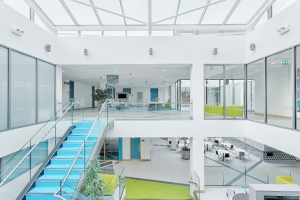 In designing the project, Rhatigan Architects have created a new external identity to the campus and a striking new entrance. The building has been designed and constructed in an energy efficient manner that reduces its environmental impact while maintaining an internal space that is comfortable and enjoyable for students, staff and visitors.

The internal works to Blocks C&D involved the introduction of two large roof lights which bring natural daylight deep into the building. As well as the creation of a series of social learning spaces along the corridors that succeeded in enlivening the atmosphere within the school for both staff and students.

The Aurivo Auditorium has been designed to provide a high standard of acoustic, thermal, ventilation and lighting performance in an aesthetically beautiful space. Designed as a flexible area for a multitude of uses, the auditorium is internally clad in timber panelling in a staggered pattern.

I.T.Sligo said that they are delighted in how the project has worked out. “The addition of a dynamic vocal entrance to the North elevation is a visually striking feature that creates a new primary entry point and establishes a strong linkage with the North Campus.

“The overall attention to detail and quality of materials have greatly enhanced the internal environment.

“The Aurivo Auditorium has been cleverly designed to maximise the aspect and functionality of a previously underutilised space on campus,” they concluded. 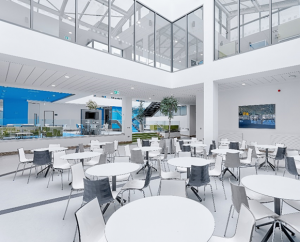 Both phases of this project were completed on a very tight time frame due to semester restrictions of the college. The €6.4m project was also delivered within budget.

Rhatigan Architects Associate, Gavin Phelan said “It’s a great honour to be shortlisted in the Education Project of the Year category.  It’s fantastic when a project that we took great pride in gets recognised, we look forward to the awards night.”

Now in its fifth year, the Irish Construction Industry Awards has established itself as the premier event in Ireland for bench marking excellence in the construction industry in Ireland.

Since launching in 2014, the Irish Construction Industry Awards has recognised on a national scale some of Ireland’s leading construction projects and the teams behind them.

Rhatigan Architects is a design-driven practice, specialising in work space, residential, healthcare and education buildings, based in Sligo, Dublin and Donegal.