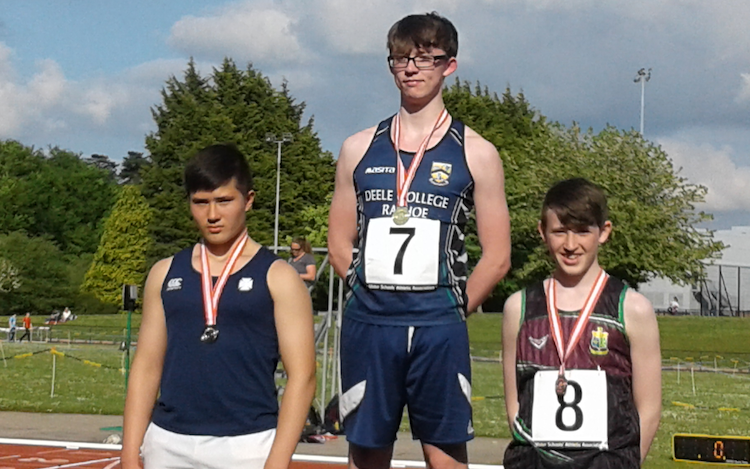 As the mercury topped 20 degrees on both days, the athletes of Lifford Strabane AC were prominent on the podium throughout as they amassed a total of 15 medals and two new Ulster Schools Records.

Picture: Lifford Strabane AC athletes Jude McCrossan and Cormac O’Donnell who took gold and bronze medals respectively in the Junior Boys Hammer at the Ulster Schools Athletics Finals in Antrim at the weekend.

Brendan O’Donnell set a new record in the Senior Boys Hammer as the sun began to set late on Friday evening, throwing 63.32m and surpassing the old record of 61.11m set by Andrew Doyle  in 2011.

Meanwhile on Saturday afternoon Adrienne Gallen set a new record of 10.63m in the Minor Girls Shot Put eclipsing the mark of 10.53m set by Kathryn Coombs in 2016. Indeed this was Gallen’s second gold medal of the championships having won the Junior Girls Hammer the previous evening when throwing a hugely impressive 47.20m.

Shannon Craig leaped to 1.55m in the Senior Girls High Jump to round off her highly successful Ulster Schools career with a silver medal.

There was success on the track too with up and coming young sprinter Harriet McCrossan taking silver in the Minor Girls 100m and then stepping up in age group to take a sensational silver in the Junior Girls 200m.

The focus now turns to the Irish Schools Athletics Finals in Tullamore in two weeks time.