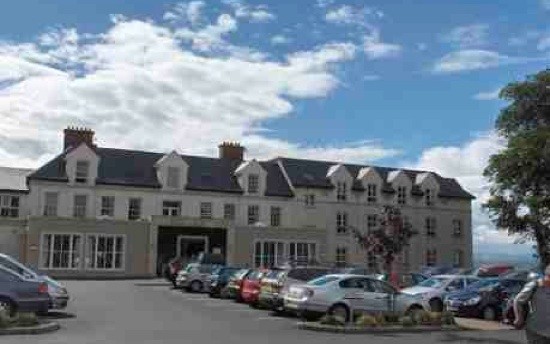 A wedding guest, who took his anger out on a hotel room in the Redcastle Hotel after having a row with his partner, will have to pay compensation of more than €700.

Neil Bramwell was charged with criminal damage in Redcastle Hotel on April 21, 2018.

Bramwell appeared at Carndonagh Court, saying he was pleading guilty to the charge before him, adding that he ‘deeply regretted’ what happened.

Garda Inspector David Murphy told the court gardaí received a report from staff at Redcastle Hotel of a disturbance and damage being caused to one of their guest bedrooms.

The manager of the hotel went to the room previously but had been met with an extremely aggressive male so Gardaí were contacted.

Insp. Murphy outlined that Garda Conor Mulkerrins went to the hotel shortly after 10pm and went to the room along with the hotel manager.

However, on route to the room they met the male [Neil Bramwell], who had been identified by the manager, in the hallway.

“The man had calmed down a lot by this stage,” Insp. Murphy told the court.

“He damaged curtain rails, broke a bedside lamp, there was a hole in the ceiling as well as other damage.”

Insp. Murphy said Bramwell had been a guest at a wedding in the hotel but had a disagreement with his partner and went back to the room where the disturbance continued.

“He admitted he lost his temper as a result of the dispute and took his anger out on the hotel room,” said Insp. Murphy.

The court heard that Bramwell was then arrested and taken to Buncrana Garda Station where he made full admissions when cautioned by Gda. Mulkerrins.

Insp. Murphy said Redcastle Hotel estimated that damage done to the room amount to €705, adding that the room was out of use for five nights while the damage was repaired.

Speaking in Carn Court last Tuesday, Bramwell said he ‘deeply regretted’ his actions and apologised for his behaviour, adding that he wanted to make amends.

“I deeply regret what happened and I’ve come here today to make amends for my actions and pay for the damage,” said Mr. Bramwell.

Judge Paul Kelly questioned his payment plan idea saying that it would take him a long time to pay the balance at a rate of £50 per week.

Mr. Bramwell said he had limited means, had to pay child support and was homeless at present living in emergency accommodation which cost him £60 per week.

He said he was doing his best to hold down a job, adding that he worked in construction in Antrim, earning £400 a week.

Judge Kelly asked Inspector Murphy if he knew what the hotel’s attitude was to the situation however the Buncrana Inspector said he was unaware as it was a relatively fresh issue and Gda. Mulkerrins was still investigating.

Judge Kelly agreed to adjourn the case until July 17 to see what progress was being made on repaying the compensation.

He warned Mr. Bramwell that he must be able to show him that he is making payments every week.